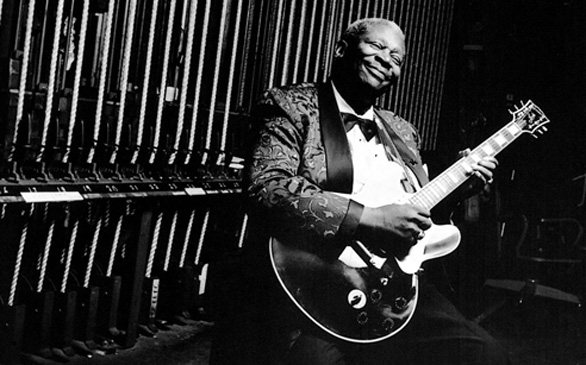 B.B. King is a charismatic storyteller.

“You don’t hear much blues on the radio these days,” quips Buddy Guy. “My record label used to say my lyrics were too racy for radio, but now I can say whatever the fuck I want!”

Guy sure can entertain a crowd with his between-song banter, as can the evening’s headliner, B.B. King, who relays a hilarious tale involving his current doctors: Viagra, Levitra and Cialis. Of course these legendary bluesmen are charismatic storytellers, the genre is firmly rooted in being able to share history through song. During “Skin Deep” from Guy’s latest album, Guy blends experiences from his childhood on a plantation in Louisiana with words of wisdom learned from his mother.

And let’s not forget their prowess on guitar. After all, King is the man who invented the concept of lead guitar, and both men are on Rolling Stone’s list of 100 Greatest Guitarists of All Time (King at No. 3, Guy at No. 30).

King shows he still has chops on “Knock Me a Kiss” and “Let the Good Times Roll.” Guy closes out his set with “Damn Right I’ve Got the Blues” leading into his customary section of short covers of other guitarists – including Eric Clapton and Jimi Hendrix – played in their exact style.

One of the sweetest moments comes with King’s version of “You Are My Sunshine” where the entire venue unites in song. King, 84, and Guy, 74, show more vigor in their performances than the majority of up-and-comers banging out sets in Los Angeles on any given night or those dominating radio airwaves. Sometimes it takes the light and talent of two older gentlemen to remind you just how beautiful life can be.