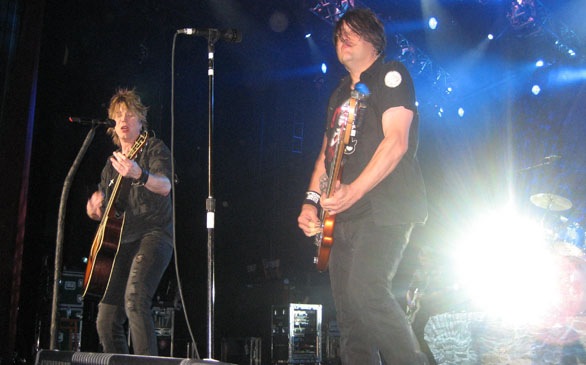 A pretty good damn night of rock! Before Goo Goo Dolls cracked the stage at the Greek Theatre, Green River Ordinance and Switchfoot delivered their unique styles. Then, the Goo Goo Dolls became the evident crowd pleaser for the show, which featured tracks from their entire 23-year career, including tunes from their latest album, Something for the Rest of Us. This summer night was the last on the Goo Goo Dolls’ tour, and they made it one to remember for the fans in Los Angeles.

The New York natives performed “Sweetest Lie,” “Not Broken,” “As I Am,” “Home” and “Now I Hear” – all from the new album. What the audience enjoyed the most turned out to be the band’s hits from years ago. “Slide” provided chills, while “Black Balloon” produced screams, smiles and laughs of happiness as black balloons were released to the sky.

With its passionate lyrics and invigorating sounds, “Iris” completed the experience, spotlighting the lead vocals of John Rzeznik. It was definitely a concert to remember.