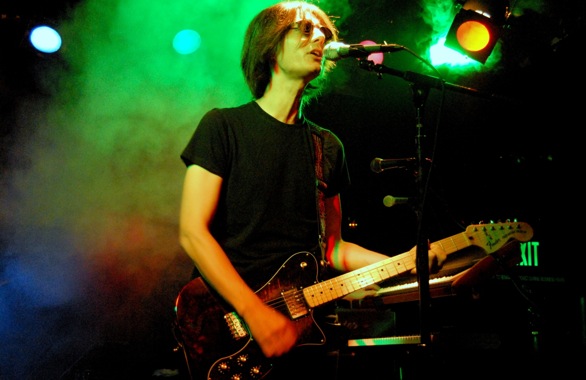 In support of their sophomore release, Your Mistake, Stealing Heather played an intimate show in Hollywood. Since the Plush Lounge is so private, Joshua Aaron delivered a passionate performance for the dedicated fans.

The show opened with their latest single, “Breathe Out,” currently topping the independent charts. Each song flowed flawlessly one after another as they offered emotional lyrics. The chemistry on stage provided a comfortable environment for the audience as it showed the band having just as much fun. Between songs, the crowd interactions continued and showcased how private the event was. Aaron constantly invited feedback and glowed as the communication from fans became overwhelming.

Drummer Carling Schatzman’s soothing beats on “Your Mistake” created instant energy as everybody’s foot followed the drumstick rhythm. Changing the vibe from gentle melodic vibes to fast-paced ripples inspired some to rock out and others to dance. Jim Briggs showcased his talents by alternating from keyboards to guitars without effort. Introducing soft harmonics and electronic sounds, each contribution stood out. The song “No Matter” proved to be a perfect example as Briggs switched to capture that record’s sound for the live crowd. The bass’ low vibrations traveled smoothly across the air. George Bohdan was nothing but smiles as he expressed his appreciation from the crowd reactions. Stealing Heather’s chemistry was spectacular.

The band performed about an album’s worth of music mixing their setlist with their debut album, Six Minutes to Nowhere, and Your Mistake. If you’re a fan of ’80s and ’90s infectious pop/rock, then this group is what you are looking for.