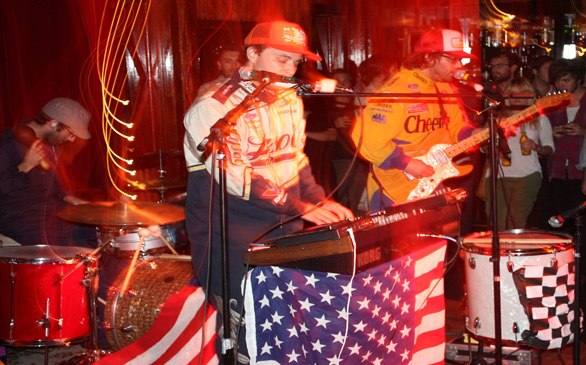 If it wasn’t for the musical instruments and the dimly lit stage, the Dale Earnhardt Jr. Jr. performance could have been easily mistaken for a NASCAR race show. The duo hailing from Detroit walked on stage wearing matching race car outfits – Joshua Epstein, the vocalist and guitarist donned a Cheerios race suit, while Daniel Zott, the vocalist and synth player, wore a Lysol race suit.

Hammering down hip-hop beats with a tang of folk, the duo rallied up quite a crowd at Three Clubs in Los Angeles. With their intense energy and drifting sounds, Dale Earnhardt Jr. Jr. had the audience spinning out of control. The aerodynamics of the band lifted up the spirits of their fans, especially during the song “Vocal Chords,” which is off their new EP titled Horse Power.

With American flags hung around the stage, this American-influenced setup was a cockpit for the two to zoom off into an intense release of music that was not only fun and upbeat but raw and melodic. Their winning streak continued throughout due to their harmonization and full-throttle energy.

Dale Earnhardt Jr. Jr. will be taking a hot lap around the United States to finish their tour, but I am hoping that the band decides to race back to Los Angeles for another pit stop.