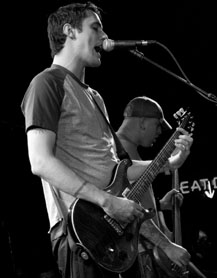 Nu-metal has gotten a bad reputation in recent years, hasn’t it? Was this caused by cookie-cutter music? Collective band egos? Who knows? Regardless, Breaking Benjamin takes all these stigmas and smashes them like one very big guitar in classic rock style.

Dark and moody atmosphere balanced by singer Ben Burnley’s soaring voice, the band put on a show that was gripping and engaging from start to finish. Burnley is the heart of the band, displaying a unique gift for emotive vocals that are equal parts stunning melody and gritty raw intensity. Tunes included many off their latest release, We Are Not Alone, which included their radio single "So Cold."

What’s really surprising is the crowd feedback Breaking Benjamin can inspire, though this is quickly demystified once you see them play. The band took numerous opportunities to reach out to the crowd and legitimately make them part of the experience. The fans responded accordingly by yelling, singing and jumping along to the music, showing without question why Benjamin is so deserving of a second chance at mainstream success.