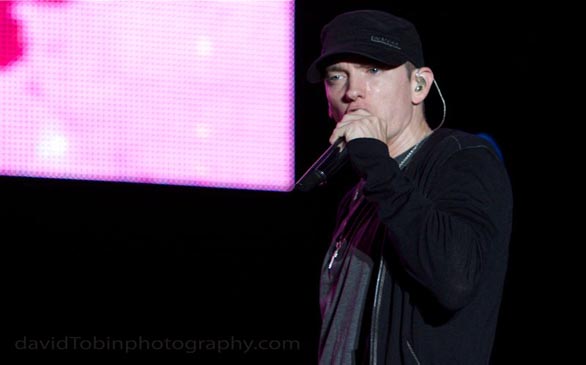 The event last year was a huge success. With a headliner like TOOL it’s hard not to pull off a large crowd that’s ready to party … So this year Epicenter had to outdo itself and it brought Eminem, KISS and the return of Blink 182 and Bush. Well, wait, I don’t know if it was a return for Bush, but they are back anyway.

With everything that the second day of this festival had in store, even the over-hyped return of a band that doesn’t really work as adults, it was about night one. The heat was blistering, but the grounds still held a bit over 20,000 people. Not a sell-out crowd by any means, but enough people to raise some hell for their hero rapper.

Eminem went on stage after his bitter rival Everlast performed with his band House of Pain on the tiny second stage across the packing lot. The fans packed in as close as they could get to the stage where Eminem was going to perform and upon his “return” the crowd went nuts.

However, the Eminem show had some kinks that kept it from being that kind of performance that signals a true recovery. Halfway through the set, Eminem started to lose control of his voice and at times got quiet, allowing the backing tracks to seep through. His cockiness seemed to show through the frustration, but in the end, the crowd was happy.

The crowd was so satisfied with Eminem’s performance that about 40 percent departed when he was done and left a very subdued crowd for KISS. The classic rockers took the stage and proved why they are legends, but the sun-beat crowd offered little support for their effort and with a restricted performance set time the band was backed into a corner.

The fans got what they wanted on some level, but it felt like the overall feel was satisfactory from the comments coming from the fans as they left the venue. Perhaps it was the 108-degree temperature or just the steep ticket price at over $80 for one day that the crowd didn’t like. Either way, the range of bands offered fans something old and something new. Now next year, they just have to offer a better location for a concert.