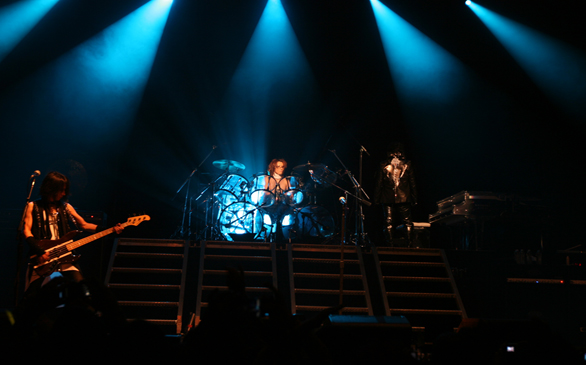 I wasn’t quite sure what to expect when I went to see Japanese glam rock band X Japan at the Wiltern and be that as it may, I was more than impressed. For a band that has been around for more than 20 years (which is literally a lifetime for most of the audience from what I could tell), they played with all the youthful energy the genre requires.

Granted, it could very well have been called the Yoshiki Hayashi show as far as I’m concerned. The 44-year-old drummer, who seemed to be going on 19, was the first one on stage posing in silhouette atop his drum set against the LCD screen as the show opened. He spent the rest of the show either playing speed-metal drums or classical piano, and it seemed like it was alternating with every song. He even played a piano/violin duet with guitarist Yune “Sugizo” Sugihara, and their proficiency was quite amazing.

Aside from the tremendous musicianship on stage, there were also go-go dancers suspended in cages above the stage and pyrotechnics exploding in fiery columns every once in a while. It was truly an unexpectedly awesome show.