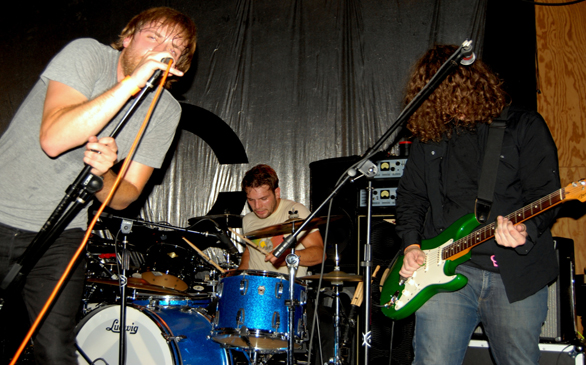 Indie rock band Empires made their first Los Angeles appearance at the Bootleg Theater supporting their latest album, Bang. The Chicago-based group kicked off the night receiving a massive ovation from the fans.

Lead singer Sean Van Vleet completely shattered the sound barrier as the show started, gripping the microphone and wrapping the cords around his fist with energy. He traveled across the stage feeding off the intensity from his band mates.

The crowd screamed at the top of their lungs during every song on cue with the words. For a band that has never played in Los Angeles, the fans were extremely dedicated and involved. The space was very limited, but that didn’t stop Empires from turning the volume up to 11 as the walls shook from the distortion. The speakers could be felt inside everyone’s chest thumping with excitement as the floor shivered with fear.

Drummer Ryan Luciani punished his equipment throughout the night. Halfway into the set, his face dripped with sweat as he grinned and showed no signs of stopping. Guitarist Max Steger played with confidence and looked completely relaxed on stage. Tom Conrad violently shredded away with his axe giving the alternative rock group a sound like no other.

Empires played with passion and heart. They were completely loyal to their fans, giving them everything they screamed for. The eight-song setlist felt short as the crowd howled for more. Still, Empires played even after the lights were cut. Expect Empires to expand across the independent scene. These guys are yearning to be heard across the globe, and with their fan base, it just might be possible.