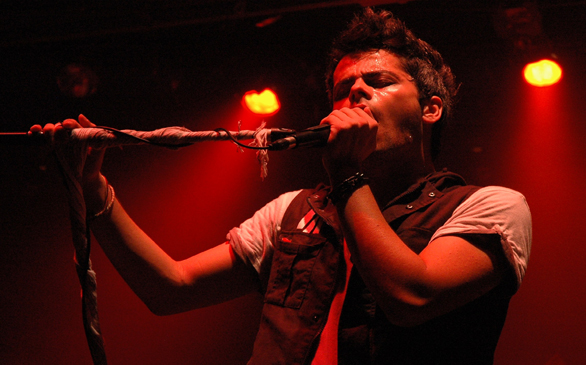 Maika Maile of There for Tomorrow
(Credit: Brien Overly)

For all the people who came to the realization that this year’s Warped Tour was indeed the desolate wasteland of trashpop and awfulcore everyone made it out to be, it should be of note that the Graduate and There For Tomorrow, both Warped vets, were conspicuously absent from this year’s lineup. Now, just to be clear, this isn’t meant to explicitly state that any tour without one or both of these bands is doomed to failure.

To implicitly suggest that they can make even a show with a terrible headliner entirely awesome, on the other hand? Totally.

When the Illinois natives of the Graduate took the stage, it seemed they were intent on proving their newest album, Only Every Time, was worth the three-year wait for its release. Playing selections from the album along with favorites from its predecessor, Anhedonia, the fivesome showed themselves to be a prime example of how to write emotive music that’s actually adult-accessible.

Frontman Corey Warning’s distinctive vocals found the perfect balance between gritty yells and subtly nuanced crooning to make even the band’s oldest material feel raw and fresh. While the new tracks are indeed catchier than ever, the band has still maintained the maturity in their songwriting and instrumentation that made Anhedonia feel so timeless, even despite the rapid changes the emo-pop landscape has undergone in the last three years. Closing with “Don’t Die Digging,” a fittingly anthemic finish to their succession of sing-along jams, the band made it clear that even though they’ve been at it for years now, there’s still bigger things yet to come from them.

Next up was the Florida-bred foursome of There For Tomorrow, shifting from the Graduate’s mellow, atmospheric vibe to turn the rock up to 11.

From the monstrously epic breakout single “Deathbed” to older gems like “Pages,” the band’s creative ability is made more impressive with the knowledge that they’ve been writing songs on a higher level since they were just teenagers. Each of the members has improved exponentially over the last years of touring, with four unique personalities showing through in a stage presence that fully and accurately reflects their technical skill now. Easily one of the most engaging frontmen in the genre, singer Maika Maile’s flair for theatrics only enhanced his powerhouse vocals, which were in turn complimented by guitarist Christian Climer’s uninhibited shredding and drummer Chris Kamrada’s furious pounding.

As a testament to just how skilled this band is, the fan-favorite cover they played of Omarion’s “Ice Box” is the only time an Omarion song ever has and ever will be worthwhile or meaningful. Just for the record, Maile’s vocal strength puts Omarion’s to shame. Feel free to pass that along to O.

Also playing songs from their upcoming remix EP, Re:Creations, including the new track “Small World,” the indication seems to be that what they have in store for next year promises to be even bigger, even better and the end to them ever getting seated at the punk rock kids’ table.

Now the aggravating part. We have two painfully talented bands playing a show together, yet neither of them were the headliners. Nothing against Ludo, but you can’t follow two legit bands rocking the heck out of a venue with a pseudo musical comedy routine. Granted, it’s nice to see two of the hardest working bands in the emo-pop-punk genre being embraced by new audiences, but the rest of the music industry and music consumers might want to quit taking their sweet time in jumping on the proverbial bandwagons here.