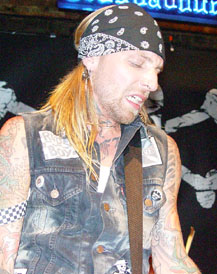 After the crowd spilled out onto the sidewalk to light up cigarettes after the Backyard Babies and Louis XIV show, the thought on everybody’s mind must have been, ‘intense.’

The night started with some smooth rocking from Louis XIV, a band that’s destined to be noticed with its mod-fashion flamboyance coupled with grassroots, organic indie rock. These guys stayed true to their music, even while playing on vintage 1960s instruments, shuffling out songs from their self-titled CD.

While Louis XIV singer-guitarist Jason Hill belted out the rhythmic and haughty vocal lines of "The Grand Apartment" with attitude worthy of the band’s namesake, drummer Mark Maigaard played a swaying back-beat on aged equipment, including cracked and torn cymbals which drove home the band’s credibility as working, talented musicians. Finishing with their single "God Killed the Queen," Louis XIV proved that a good sense of fashion and musical talent often go hand in hand.

The night’s main event, however, was Swedish punk rockers the Backyard Babies. Hitting the stage with heavyweight ferocity and never letting up on energy through the entire show, the Babies’ performance was a thesis on punk rock antics and crowd excitement.

The Babies warmed up the club with the first song from their new album, Stockholm Syndrome, and the crowd’s response to the question posed by "Everybody Ready?" was an enthusiastic, "Yeah!" Carrying on with songs mostly from their new album, the Babies sprayed the crowd with sweat, turned their amps up to 11 and proved that the cold in Sweden doesn’t mean a thing on the warm shores of Southern Cal.