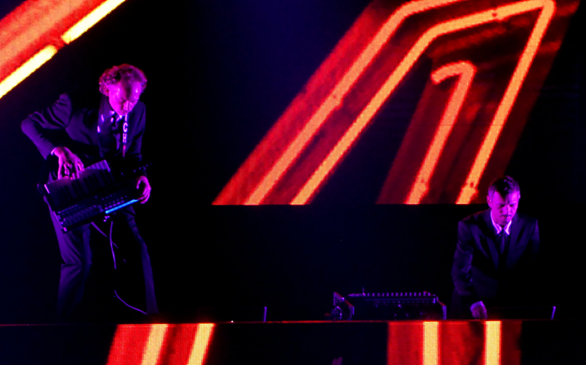 The electronic duo of Kruder and Dorfmeister stopped by Club Nokia to unleash a spectacular musical performance. As the lights went dark, the audience rushed the stage to witness a magical light show unlike any other. The bass could be felt across the floor as it pounded inside everyone’s chest.

MC Earl Zinger explained the K&D mission was simple: “To make your mind unravel and your body feel motion.” As the show continued, the mission was instantly accomplished with hip-hop, drum and bass and reggae jazz collaborations. It was impossible to stand still as the tempos and deep rhythm mixtures forced everyone to dance.

The club nearly ignited as they performed a slower trip-hop adaptation of Depeche Mode’s “Useless.” Ras MC T-Weed also sang along with Zinger, adding flavors of reggae and jazz into the mix. They fed off the crowd’s energy by dancing, jumping and twisting across stage.

Electrifying and hypnotizing, the LED screen visuals of Fritz Fitzke were assembled around Kruder and Dorfmeister. The vibrating colors and lights floated along with the beats creating deep space backgrounds and multiple dancing icons. Accompanied by strobe lights flickering every second, the stage show added finesse to an already perfect evening.

K&D carried a danced-packed two-hour setlist with house beats, slow tempos and mellow harmonics. Encore performances included a rewrite of the Beatles “Let It Be” with the lyrics changed to “K&D” instead of “Let It Be.” Zinger expressed tremendous gratitude on behalf of K&D as they bowed before the dedicated crowd. The tour was in celebration of their 16th anniversary with the label they created, G-Stone Recordings.