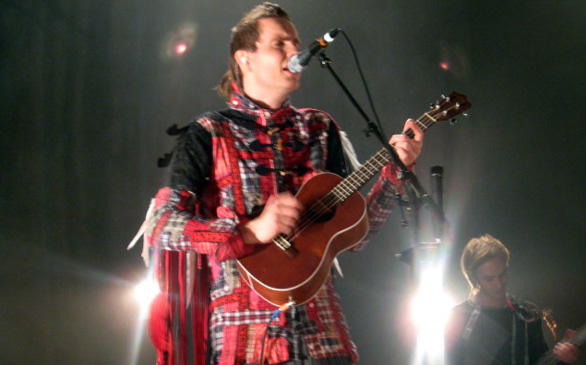 There are good live shows and there are those that transcend the stage and become something bigger, fulfilling a certain primal need in us for spectacle and ritual. Sigur Rós frontman Jónsi’s solo show is a total experience, incorporating animated projections and costume to create a space outside of the typical, an almost sacred performance that is nothing short of magical.

The show is quintessentially Icelandic and not just for indulging in the eccentric. The visuals draw primarily from nature and for a nation that still holds a strong belief in elves, Jónsi and crew certainly resemble them: The stage garb is part fairy tale, part Lord of the Flies.

The show begins with a somber yet hopeful “Stars in Still Water” that builds to glorious heights and begins a trend that continues throughout the evening of utter silence throughout until each song reaches its completion, as if everyone in the theater is holding their breath. “Hengilás” and “Icicle Sleeve” maintain this pensive tone.

“Kolniður” soars with some of the most spectacular visuals of the night forming a magnificent backdrop. A charming percussive number played on a number of xylophone-type instruments leads into “Volcano,” which is highly emotional, building to a crescendo and then collapsing again until it is carried only on Jónsi’s drawn-out rasp. “Sinking Friendships” is heavenly, tinkling piano perfectly paired with raindrops on windowpane visual. “Saint Naive” perfectly showcases Jónsi’s haunting falsetto and leads into the much-anticipated “Go Do,” and the thus far awestruck-attentive crowd erupts enthusiastically.

“Boy Lilikoi” is as charming as “Animal Arithmetic” is frenetic, with Jónsi wandering the stage like a man possessed. After a stunning new song that shows what Jónsi has up his sleeve for the future, “Around Us” has Jónsi leaping up from behind the piano to prowl the stage again, collapsing to the floor and triggering vocal effects pedals that disassemble his voice into chaotic shards of sound at the finalé.

Jónsi re-emerges for an encore that consists of the energetic “Sticks and Stones,” which again whips the crowd into a frenzy. The ensemble finishes with the powerful “Grow Till Tall,” which builds into a raging beast as tornado imagery explodes on the screens and Jónsi himself conjures up the tempest, raging and shrieking in a breathtaking display of rage, unexpected from the otherwise soft-spoken Icelander.

The ensemble receives a standing ovation as they return for a theatrical bow, but then this was the ultimate theatrical experience; a show that will blindside you and as I witnessed, leave even the burly tattooed sort confessing that they openly wept. And that is why this was much more than a rock show.