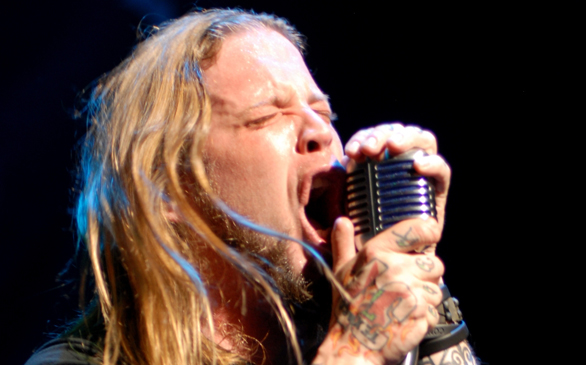 Drummer Mike Luce hyped the audience with drum intros as he held his own with excellent rhythms and backing vocals. Lead Singer Ryan McCombs paced like a caged animal while they opened with “Sinner.” The crowd quickly responded with circle pits across the floor. McCombs’ screams seemed to intimidate the microphone he gripped as he shook it in his hand. C.J Pierce played with raw emotion and fierce intensity, alternating from high-pitched riffs to heavier melodies. Stevie Benton’s bass sent out thick vibration waves around the venue as the people in the front row rapidly banged their heads.

Drowning Pool pulled out all the stops for the final date of the tour. The atmosphere shifted as they played “37 Stitches,” a lyrically driven and extremely emotional track. It provided a perfect opportunity to showcase Pierce’s talents as a guitarist. They continued in a softer direction with “Turn So Cold,” as they managed to play at least one song from each album.

As they thanked the audience for a wonderful time, the countdown started and “Bodies” came on. McCombs jumped into the crowd, participating in a massive pit as he screamed “Nothing wrong with me” and crowd surfers traveled around. Drowning Pool delivered an amazing performance.