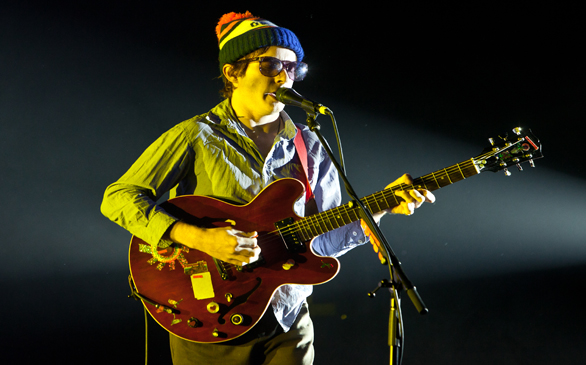 Did they come out with a new album? Did it suck? Dr. Dog at the Wiltern Friday was sparsely packed, each song lasting shy of two minutes and all generally sounding too reminiscent of the last, save the tunes that we know and love.

Perhaps it was the muddy sound at the Wiltern, coupled with an early show time, two openers most have never heard of and the outnumbering of an R-rated audience with an NC-17, but this live show lacked all the feel of their live shows in the past. But hey, the kids had to be home by curfew.

With lights staged by Roy G Biv, there was no thunder, no pot of gold, no kidding as the show moved through the hue cycle. And we moved because we knew what to expect, we’ve heard these albums a million times (or at least twice). “Is this the worst trip you have ever been on?” Dog sings.

When I see a live show I don’t want to feel like I’m listening to the radio, or worse, a backing track. It hurts to say it, but if the lights turned on in the venue, you’d see about 67.2 percent of the venue filled, in gapped groups slouching, and at song’s end clapping emphatically because we should. Some sing to the songs they know, the rest “Shazaam” the ones they don’t. And unfortunately, find that it actually works.

This band works best not as a headliner in a large venue with high-frequency sound, but is still more of an outdoor festival act, or maybe even just a much smaller house act. Of the five to 10 times I’ve seen this band, they’ve always put on a great show. This had to have been an off night.