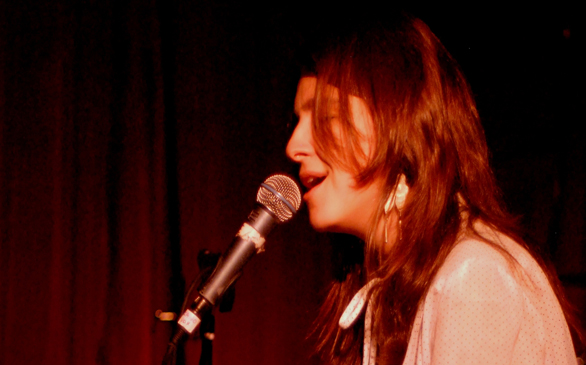 New York based Emily Greene played the Hotel Café in front of a packed audience. Promoting her debut album, Is This What You Had in Mind, The 24-year-old singer-songwriter looked relaxed and confident as she revealed herself emotionally with her songs.

Accompanied by three gentlemen on stage, Greene sat behind a keyboard and displayed her passionate voice across the club. Alternating to a baby grand piano, she pressed each key with sensuality and eroticism. The folk-pop ambience soothed the warm air as it traveled around the room. Her soulful voice was well received, as the cheers between songs grew louder by the end of the night. Greene showcased her versatility by transcending between upbeat positive songs like “Starting Fresh” to emotionally driven tempos such as on “Is This What You Had in Mind.”

Although her music was sentimental and warm, she revealed a quirkier side between songs. With Christmas lights decorating her keyboard stand, she showed a comical side while interacting with the crowd. She poked fun about her personal experiences while in New York. Greene made jokes about long-distance relationships she’s had to loving and hating best friends to the keyboard petals failing to work. She appeared to be at 30 places at once, as she smiled and repeated, “No more coffee for me.”

Greene’s music was a blend of Norah Jones and a tamed version of Amy Winehouse, sprinkled with light shades of Sarah McLaughlin. She presented herself very articulately and carried herself with passion. Still, she radiated a sweet and innocent demeanor as she closed the night with an a cappella cover of “A Dream Is a Wish Your Heart Makes.”