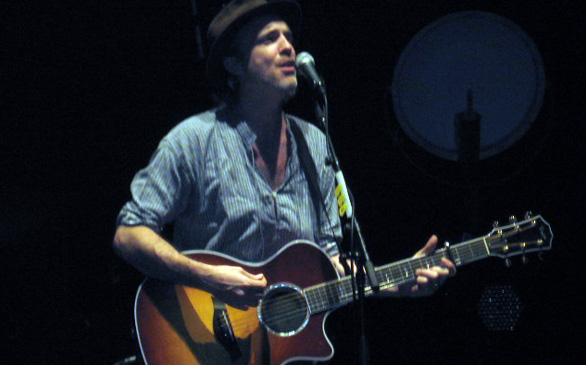 Fran Healy and Brandon Flowers make good bedfellows these days. They’re undoubtedly two of rock’s finest male vocalists and both have recently ventured away from the security of their respected bands in pursuit of solo careers.

Healy, voice of the influential group Travis, braves the crowd armed with only an acoustic guitar, a handful of lovely tracks from his first solo album Wreckorder and a solid dose of Scottish wit. His storytelling is at least as good as his songs, offering up personal revelations about the making of his album, recent conversion to vegetarianism and how one night in Berlin he persuaded Neko Case to sing on his record (Oddly enough she also appears on Flowers’ release.).

“I’m from Scotland. We like to blather,” he explains.

His stripped-down set is gorgeous. Standout selections are the hauntingly beautiful “Anything” and recent single “Buttercups” with its self-deprecating but oddly uplifting chorus. Healy tosses in “Driftwood” and the shamefully few audience members hip to Travis’ impressive back catalogue erupt with approval. Hopefully, Healy will return with a full band and give audiences a real taste of the complex beauty that is evident on Wreckorder.

Next, Flowers, charismatic frontman of the Killers, takes to the stage and the response is truly deafening. He kicks off his set with a perplexing choice, the gospel-influenced “On the Floor” but soon launches into the lifting and powerful “Crossfire.” He quickly takes command of the stage and his audience, bounding across the stage and atop monitors. Both Flowers’ energy and his voice are tremendous; he exudes a playful confidence and somehow makes quality showmanship look like a walk in the park.

His set is comprised of tracks from his solo debut, Flamingo, with some surprise covers like “Bette Davis Eyes” and of course Killers tracks like “Losing Touch” thrown in for good measure. He tells about growing up in Henderson, Nev., in introduction to a paired-down, acoustic performance of Flamingo’s opener “Welcome to Fabulous Las Vegas” that showcases the remarkable power of his voice and then raises the energy tenfold on songs like “Swallow It” and the anthemic “Only the Young.” On “Playing with Fire,” he seems to channel Roy Orbison.

The encore features surprise guest Andy Summers of the Police who joins Flowers for a rendition of “Roxanne” where Flowers effectively sings circles around Sting. He rounds out the night with the Killers’ “When You Were Young” and leaves the crowd begging for more. A blinding performance from two legends.