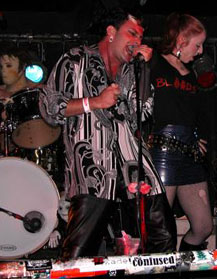 Within the dark crevices of The Joint, anticipation hung heavy in the air as fans awaited the fiendishly delicious Bloodsak to possess the stage. Dressed in their quasi-satanic, semi-gothic rock star attire, the members of the band, as well as two gyrating go-go dancers, began their set with a hemo-toxic rendition of The Runaways’ "Cherry Bomb."

Next up was "Bloodsak Baby," a Bloodsak song staple. As the band chugged mercilessly away on power chords, go-go dancers unleashed a flurry of flying tampons onto the crowd complete with make-believe blood (a stunt which no doubt caused some of the audience’s blood to curdle).

Yet singer Kerr "Dark" Lordygan and the rest of the band were just getting warmed up as they proved with the song "She’s a Good Book," which had the band’s dancers performing vicious autopsies on thriller novels, tearing out and flinging pages all over the stage and the audience. This was not just music, but eery performance art as well.