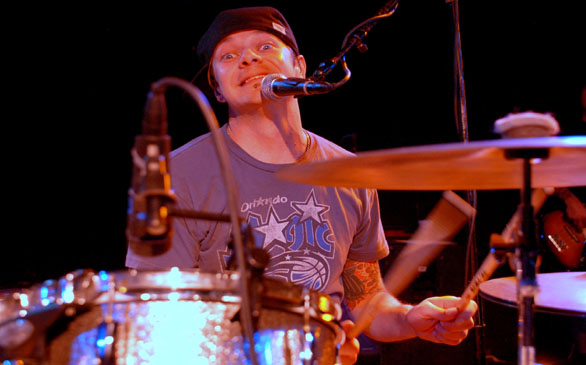 Rock/reggae act the Supervillains launched a 30-city fall tour with Ballyhoo. Much like the music and atmosphere of the night, the “Ehh Brah Party” tour lived up to its name as it showcased the laid-back attitude and feel-good ambience. To no surprise, a massive crowd arrived ready to dance the night away.

Ballyhoo instantly had the audience on their feet as they took the stage. Lead singer and guitarist Howi Spangler apologized for feeling under the weather but showed no signs of wear and tear on stage. Much to the contrary, Spangler burst into a musical zone with the band flying on pure adrenaline. Although the music was heavily driven by reggae and ska, it didn’t limit the group from including short drum and guitar solos. They showcased their rock roots and added a decent layer with turntables in the mix. With all those elements, Ballyhoo’s songs easily became contagious as everyone sang the words.

Closing the night were the Supervillains with enormous praise from the crowd. Coming from the beaches of Orlando, this four-piece performed with infectious energy that caused insanity across the floor. Lead singer Dom Maresco sat behind his drum kit entertaining the crowd between songs. Saxophonist Smally added a unique ska sound to the band. They controlled the crowd all night, even causing a few mosh pits to break out.

The tour mission was complete as everyone, including the bands, had an amazing time. A 90-minute setlist included catchy songs like “Little Girl” and “20 Excuses” that stuck in your head for days.