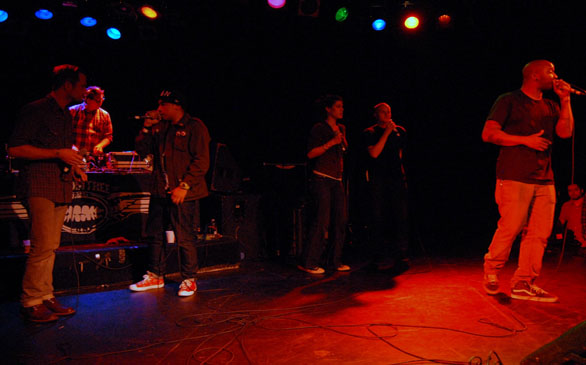 Not many acts can match the energy that hip-hop group Doomtree creates. The sold-out crowd stretched nearly two blocks as they anxiously waited to enter the venue.

Lazerbeak kicked off the show with a guitar in hand as DJ Paper Tiger mixed behind the turntables. Showcasing material from their individual albums, the music was enough to drive the audience insane. As P.O.S, Dessa, Mictlan, Cecil Otter and Sims joined the stage, the seven-piece crew received an enormous reception across the floor.

Doomtree isn’t your typical rap group. They swerve pass the stereotypes of “guns and bling" that have sent hip-hop down a dark road. Each member’s lyrical delivery was precisely executed. Words traveled across the room like flying daggers cutting everyone in sight. The microphone rotated across the floor like a revolving door giving Doomtree a unique sound.

“Rap won’t save you,” shouted MC Mictlan as the crowd bounced arms in the air. The words led to the song “Game Over” from the group’s self-titled album. Dessa’s contribution slowed the pace as she performed from her solo work with mellow tones. Still, she quickly wowed the audience with her speedy lyrical delivery. They alternated faster than the mind could compute while the crowd stood amazed at P.O.S.’ freestyles. Many verses lingered in the air long after they were pitched, much like the song “Prize Fight” that instantly became a shouting competition with the crowd as they sang in unison.

The Wings+Teeth tour provided the perfect opportunity to capture the Minneapolis crew. It’s hard to catch Doomtree in its full lineup. With individual members tied to their solo projects, it’s no wonder everyone jumped at the opportunity to see one of the best underground rap groups. After witnessing Doomtree’s lyrical performance, it’s enough to prove hip-hop isn’t dead.