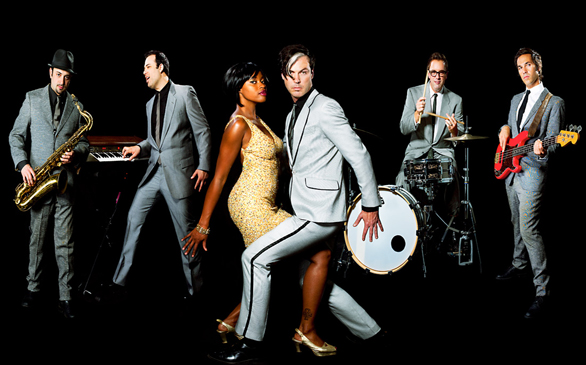 About four months ago, someone gave me an advance copy of Fitz and the Tantrum’s Picking Up the Pieces. I thought, “Oh what a good band,” but I didn’t think twice after hearing it. Fast forward to Nov. 17 and the opportunity arose to see Fitz and the Tantrums headlining a show with a friend’s band AWOLNATION, so I gladly accepted.

I was excited to see AWOLNATION, featuring Aaron Bruno from previous bands Hometown Hero and Under the Influence of Giants, perform their dance rock tunes, including “Burn It Down.” Their energy was great, and I noticed more than a few people rocking out.

Around 10:30 p.m. came FATT with their Motown-esqe sound, who by the way came out with a vengeance from the get-go. For a band that is fairly new – their first show was in 2008 – they have already garnered an impressive fan base. The El Rey was sold out and rightfully so.

From the brass section to frontman Michael Fitzpatrick’s crystal clear voice, I could tell FATT was pumped to be in front of the standing-room-only crowd. My only complaint is that the mixers did not do background singer Noelle Scaggs justice. I shouldn’t say background because honestly she has a set of pipes on her that can burn a house down. Her voice is completely electrifying and provides the perfect balance to Fitzpatrick.

One thing is for sure, FATT is on the brink of crossing over. With a little fine-tuning and more word of mouth, the sky is the limit.