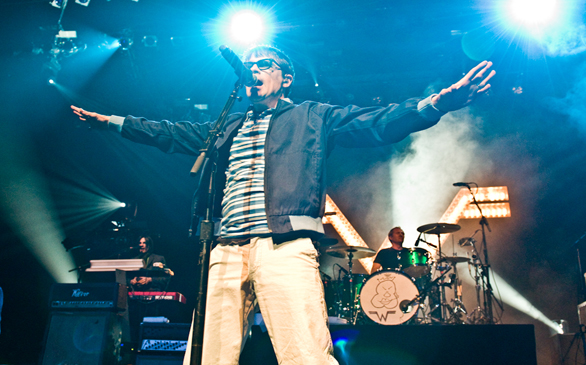 With incredibly enthusiastic and loyal fans, Weezer won over Gibson Amphitheatre the weekend of Nov. 26. Following Best Coast’s upbeat opening set, Weezer took to the stage with their newest addition, Memories, and were greeted by a full house of screaming fans.

Frontman Rivers Coumo spared no time in getting up close and personal with the audience. By song two, “Pork and Beans,” he was in the middle of the theater surrounded in a sea of people. Spotlights struggled to keep up as he made his way through the crowd. This continued off and on throughout the set with a momentary dance with a fan in the aisle, and he wore another audience member’s cowboy hat on another venture into the crowd.

Bethany Cosentino of Best Coast joined the band for their rousing performance of “Island in the Sun.” The audience took care of every “hip hip” in perfect time.

Playing to a full house, Weezer did not disappoint. Many audience members came out for both nights of the band’s Gibson weekend and were eager to join in on day two. Going through the decades with the band was a fantastic way to close out the busy holiday weekend.