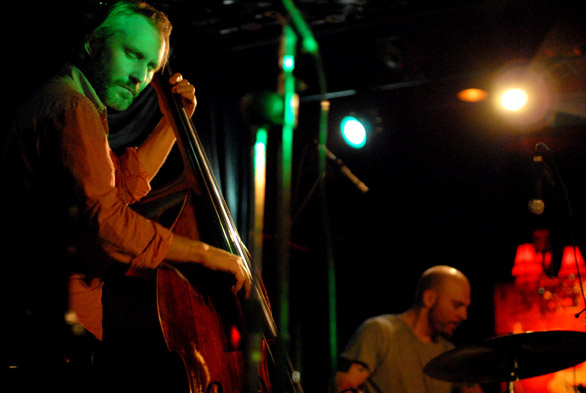 People quickly filled their seats as dinner plates and cocktails arrived in time for the Bad Plus to take the stage. The club pressed the limits of capacity, as standing-room-only became the last resort. Meanwhile, the lights dimmed as powerful bass vibrations consumed the floor. Piano keys bounced about the club and gentle drumbeats filled the air. At last, the jazz show had begun.

Reid Anderson stood in the middle of the stage with a double bass while strumming each chord with grace and finesse. His expressions reflected the deep rhythms escaping his bass. Drummer Dave King provided the pleasant thunder of the night, as he slowly built the atmosphere from a soft gentle notion to a violent rage of fury. Pianist Ethan Iverson, who also served as the host, unleashed a series of musical outbursts providing a dynamic sound that completed the Bad Plus’ essence. Together they carried the audience through an amazing musical journey for two hours.

Between musical arrangements, Anderson would introduce the songs and provide quick descriptions that caused the audience to laugh uncontrollably. Everyone erupted with applause and cheers between every song as the trio earned the crowd’s respect. After taking a quick intermission, they continued the melodious night in a much faster direction. The musical performance displayed variations of peace, tranquility, excitement, anticipation and utter madness. With all those elements combined, the concert proved to be nothing short of spectacular. They delivered an encore performance before bowing to the crowd.

These three gentlemen have played together for a decade and share deep chemistry unlike any other.