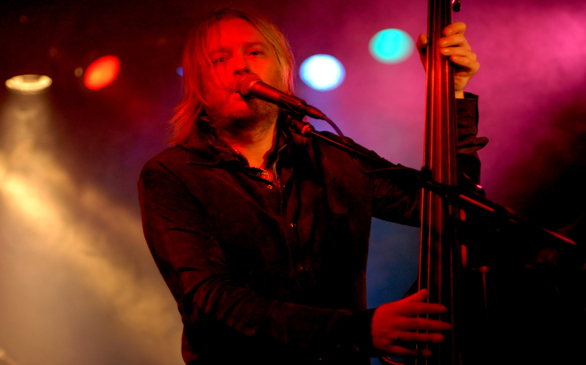 Hard rock group Owl performed in front of a sold-out Hollywood crowd. Playing their last show of the year, they began the night with a dynamic intro led by an intriguing bass line. As the lights became brighter, the guitar and drums joined the magnetic energy floating in the air as they captivated the crowd.

Lead singer and bassist Chris Wyse ignited the audience with powerful showmanship. Currently the bassist for the Cult, he showcased his versatility in Owl by transcending to another musical level. Wyse sang with passion and dedication as he won over the crowd.

Guitarist Jason Mezilis played with ambition and finesse. His heavy guitar riffs blazed across the stage with power and energy. Mezilis also provided backup vocals that blended seamlessly with Wyse.

Drummer Dan Dinsmore completed the band by delivering an aggressive and ear-splitting performance. Together they unleashed a remarkable sound that shook the Roxy’s foundation.

Many elements were explored throughout the evening. Owl drifted from thick jazz vibrations to heavy-hitting rock assaults. Wyse revealed a standup electric bass adding a deeper rhythm sound. His playing style alternated between songs as he picked the strings and also used a bow while strumming the bass. Wyse and Mezilis often switched rhythm and lead roles as they fed off each other’s energy. Since Wyse and Dinsmore’s relationship exceeds decades, their stage chemistry appeared flawless and absolute.

Paying tribute to Jim Morrison from the Doors, Wyse sang “Five to One” until the band began playing “Alive” from their self-titled album. They finished the night with their latest single, “Pusher,” and the guitar riffs and lyrics quickly became addicting to the audience as they sang along. With their latest EP release and a spring tour in the works, 2011 holds no boundaries for this power trio.

Then, Los Angeles-based jam-group Camp Freddy welcomed the New Year in front of countless screaming fans. The rock star super group played a series of shows throughout December with multiple guest appearances. They concluded their final show of the year by featuring an all-star guest performance.

Lead singer Donovan Leitch, Jr. kicked off their set with a cover of Ballroom Blitz. The crowd erupted into a mad frenzy as guitarist Billy Morrison and drummer Matt Sorum took the stage. Dave Navarro and Chris Chaney couldn’t make the show due to prior Jane’s Addiction engagements, but Steve Stevens and Wyse from the Cult filled in perfectly. Guitarist Billy Duffy, who also played with the Cult, momentarily took the stage during the Billy Idol song “Rebel Yell.” Everyone in attendance sang along to the songs with drinks in their hands as they anxiously awaited the New Year.

The night continued with a carousel of rock star appearances. They performed an amazing version of “War Pigs” by Black Sabbath that led the crowd to sing louder than the band. As Morrison finished the guitar solo, everyone on stage covered the audience with silly string as balloons dropped from the ceiling. They announced the New Year while band members surprised their wives on stage for a toast. As balloons floated around the air, Cherie Currie from the Runaways joined the stage to sing “Cherry Bomb.” Following her appearance, Matt Sorum introduced Steven Adler from Guns N’ Roses as he sat behind the drums to play “Paradise City.” The night ended with an amazing drum solo by Dave Lombardo from Slayer and a surprise appearance by Lemmy from Motörhead. They finished the setlist with “God Save the Queen” and “Bomber” by Motörhead.