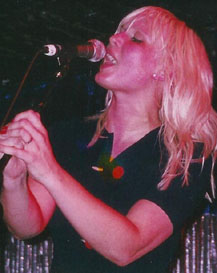 This show was a rocking night characterized by beer, head bopping and peculiar cameramen. Fans lined up waiting to take a trip to the 1950s with a twist.

Even though The Raveonettes released their anticipated third CD, Pretty in Black, I just recently discovered what I was missing: the band’s repetitive, nostalgic sound. Before going to the show, I predicted that their performance would be good, however, I wasn’t prepared for how hard this band rocked. Since the show, their new CD has kept permanent residence in my stereo, allowing me to relive the "Raveonette experience" over and over again in my head.

Previous releases like the Whip it On EP and Chain Gang of Love are characterized by heavy distortion, fuzzed guitar melodies and steady percussion. The short melodies bring you back to a time when grandpa listened to the oldies station in his car on your way to school. Their sound embodies the "old" yet has a tablespoon full of the band’s own personal touch. Not only do The Raveonettes’ songs have that fast tempo that drives fans wild, but Pretty in Black touches on a soft jingle.

The opening band, She Wants Revenge, emulated a Bauhaus-type sound, yet the lead singer heavily focused on letting audiences see his pink underwear and rock-hard abs. The crowd was mostly distracted from the rhythmic steady beats by his need to make love to all the women in the audience. Revenge’s dark and serious sound was danceable, but strangely made the audience want more skin to be revealed.

Although Spaceland embodies a venue that Trekkies on a spacecraft would visit, She Wants Revenge and The Raveonettes opted for simple black outfits instead of wearing crazy ensembles that might distract audiences from their music.

The Raveonette’s carefully selected set made fans go wild. The packed crowd shouted for their song of choice, but the band wasn’t willing to change their set list. Guitarist Sune Rose Wagner and bassist Sharin Foo not only focused on new music, but surprised us with old favorites as well.

The opening song – three minutes of heaven – was infused with the energy fans craved. The Raveonettes made playing music look effortless.

During the show, Foo kept posing for photographs while trying to maintain her rock star cool, but this didn’t stop fans from drooling over her beautiful presence. Before playing "Ode to L.A.," Foo was sure to mention how she wished Ronnie Spector was there to help her out at the show.

As their 18-song set-list came to a close, fans were shocked that the band didn’t stay for an encore song. Instead, "Twilight" was the last song of the hour, with The Raveonettes gifting their fans with an extra long version. I was disappointed by the lack of an encore, but if I were playing in Spaceland, I too would have opted for the nearest exit to let the sweat evaporate off my body. The Raveonettes played a great show, leaving fans smiling and waiting to relive an awesome show in their cars on the drive home.