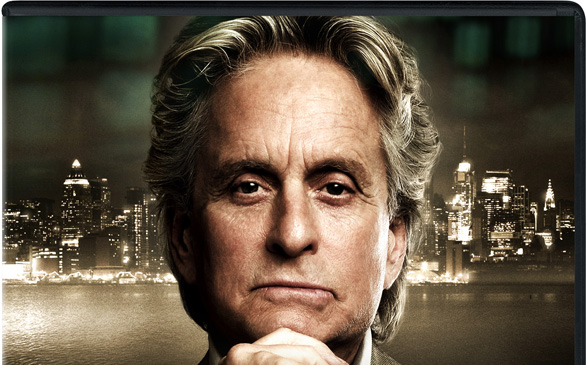 The Majors: Oliver Stone returns to the financial industry with Michael Douglas reprising his Oscar-winning role as Gordon Gekko in Wall Street: Money Never Sleeps. Shia LaBeouf plays an up-and-coming stock trader who teams with the disgraced Gekko to warn the industry of the coming economic disaster.

Emma Stone garnered a Golden Globe nomination for her performance in Easy A, a high school update of The Scarlet Letter. When Stone tells a white lie about losing her virginity, she soon finds herself an outcast, until she decides to use her newfound status to her advantage.

The Vault: How To Get Ahead in Advertising, Bruce Robinson’s (Withnail & I) balls-to-the-wall attack on the 1980s advertising industry, is one of the best satires of the last 30 years. It follows a hotshot ad exec who becomes blocked when he has to come up with a campaign for a zit cream. As pressure mounts, he finds that he has grown a very inconvenient second head.

America is bankrupt and the only recourse for President Chet Roosevelt (John Ritter) is to hold a telethon in Americathon (1979). Elvis Costello, Meat Loaf and Jay Leno make cameos in this long out-of-print satire now available online through the Warner Archives.

Under the Radar: How much, if any, of Catfish is real? Does it matter? The filmmakers stand by their claim that the film is a straight documentary, but not everyone is convinced. The film is spellbinding either way. It follows a young New York photographer who strikes up a friendship with a family over Facebook – but not everything is as it seems.

Bitter Feast is a blackly comic thriller about a disgraced chef who kidnaps the critic who sank his career and forces him to prepare deceptively simple dishes, dispensing punishment for anything less than perfection.

The Idiotbox: “The Ricky Gervais Show” is a hilarious animated adaptation of the British comic’s popular podcast, which features “The Office” creator and his two wacky friends musing on life’s big questions, like monkeys in space. The Complete First Season is now available.

Emmy-winning miniseries The Temptations chronicles the rise of the group from the streets of Detroit to Motown legends. Adapted from the book by founding member Otis Williams, the series features beloved hits and great performances.

Toni Collette returns in her Emmy-winning role in United States of Tara: The Second Season. Collette plays a housewife with dissociative identity disorder. Along with juggling domestic crises, she has to contend with the multiple personalities living in her head, including two new additions.

Bill Paxton leads a stellar cast, including Jeanne Tripplehorn, Chloë Sevigny and Harry Dean Stanton in Big Love: The Complete Fourth Season. The series follows a modern-day polygamist as he juggles three families while launching a Mormon-friendly casino and a possible run for state senate.

There are more pranks and parties in Greek: The Complete Third Season, as the students of Cyprus-Rhodes University deal with the fallout from the “End of the World Party.” Academic pressures collide with romance drama in this ABC Family series.

If you’re more into the Bret Easton Ellis kind of college experience, travel across the pond with BBC’s Skins: Volume 4, which follows a group of hedonistic British undergrads.

Blu Notes: Jean-Pierre Melville made a slight departure from his typical noir milieu to craft a masterful view inside the French Resistance in Army of Shadows (Criterion Collection) now on Blu-ray. The result is never less than riveting.