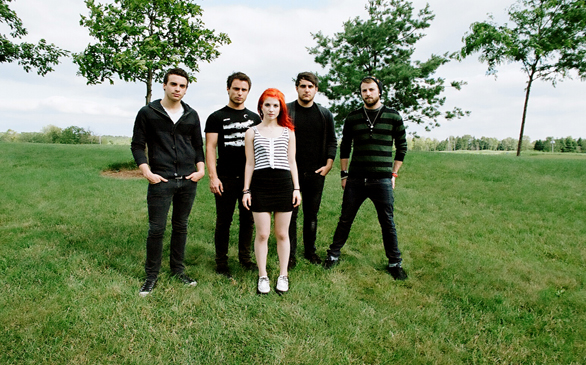 Paramore, before the departure of the Farro brothers

After splashing onto the music scene with bright hair and a colorful personality, pop/rock Paramore pixie Hayley Williams launched a music career that exploded.  But whilst the gal snagged stardom and buzz, the guys in the band stayed mostly in the background. It was mostly Williams’ eyes and red hair that filled magazine stands, and the name Paramore became automatically associated with her face.

And now it seems Josh and Zac Farro have had enough. In a feisty blog entry, the sibling duo revealed their dislike towards supposedly sneaky movements on the part of Williams’ manager and parents to catapult her to fame and kick the guys out. Not only that, but they revealed hard feelings over a breakup and lyrics from “Brand New Eyes” that conflicted with their Christian beliefs.

From the get-go it was the biting lyrics, young age and fiery persona of Williams that got the music world’s ears perked up. She was college age, hardly over five feet and belted out notes like it was nobody’s business, carrot microphone in hand.

For the guys, her fame became too much. The image of a happy, successful band dissolved when the Farro brothers finally departed. Whether or not the blog entry holds truth and regardless of where the blame should lie, the tiff shows the members of Paramore were on completely different wavelengths regarding their image. Williams stayed at the forefront and was able to land many solo interviews while the guys received minimal attention, something the blog entry brought up various times. Williams was not just Paramore’s poster child, she became its entire personality.

The new Guns N’ Roses is nothing without guitar-note-ripping Slash. Sure, the blonde, bandana-clad Axl Rose wowed the music world with his arresting blue eyes and sexual sheen, but Slash had the talent and recognizable curly hair to make his name synonymous with the band’s persona. Without him, the new Guns N’ Roses band formation didn’t strike up half the attention, and Chinese Democracy remains a far cry from Welcome to the Jungle.

In this case, both of the guys made the band. But for the Farro brothers, giving up their amount of the spotlight in the beginning got them a nice and cozy spot as William’s background men in their musical journey. If their problem with Christian lyrics was serious, what about Williams’ bitter recounting of a fight over a guy on “Misery Business” where she crooned, “God, it just feels so good?” From the very first album, the lyrics lured in an angst-ridden and honest persona, one far from the Christian identity the Farros so heavily identified with. Although the lead singer oftentimes plays the role of the lyricist, the rest of the band members also have the right to create the band’s image. The issue not dealt with, Williams continued writing tracks that hit hard but also got the band veritable fame that would prove harder to attain if Paramore tried to jump-start their career as just another group of guys trying to make it big in the music world.

No one in the band possesses the epic talent level of rock icons such as Slash, but what separates Williams from the guys lies not in musical genius but in energetic stage performance and a consistently confident personality. William’s VMA performance with B.o.B. made it obvious she can hold her own, sans the vegetable microphone and the rest of the guys, aided only by the distinctiveness of her voice and a pair of heels.

With their new tour, Paramore gets to introduce new members, an experience as mixed-bag as introducing a new boyfriend to your teenage daughter. But if Williams stays with Paramore, the band’s run is far from over.

Letting Williams take most of the attention only makes it easier for her to move forward, whether in the new Paramore formation or with a solo career. For the hundreds of bands blossoming from independent productions and car garage practices, the lesson is simple: Either present yourself as take all of us or none of us or push your glitzy gal or hunky guy to the forefront, watch quietly and then take your share of the fame and fortune when the time comes.