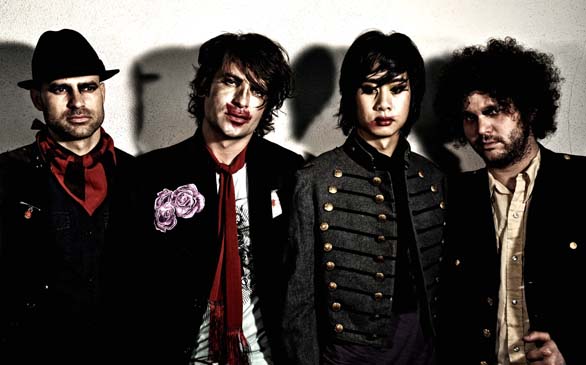 After Gris opened the night, Valenzuela followed with a mellow, yet infectious alternative rock portion that really set the mood. Each of these acts hit the stage for 30 minutes.

Valenzuela recently released Gemini, and he showcased most of the album’s tracks, including “La Aguja En Tu Ropa” (The Needle In Your Clothes) and “Si El Rio Suena” (If The River Sounds), among other crowd pleasers.

Velorio’s performance truly came as a surprise to everyone in terms of how great they sounded. Their diverse lyrics, accompanied with the mix of beats ranging from rock to Caribbean sounds, pleased the audience immensely. Velorio’s cumbia-rock tunes shined as well.

This indie alternative, new wave, rock band is based out of Los Angeles. Composed of Kinski Gallo (vocals), Rodax (bass), Jason Li-Shing (guitar), and El Pipe (drums), Monte Negro is a quartet creating sounds that have never been heard before, and it’s working. The crowd loved them from beginning to end during their 80-minute show.

Kinski’s distinguishable voice pleased the house in both English and Spanish, and both simultaneously. Their wardrobe was innovative to boot, and their up-tempo demeanor both physically and musically powered the unforgettable hours of darkness.