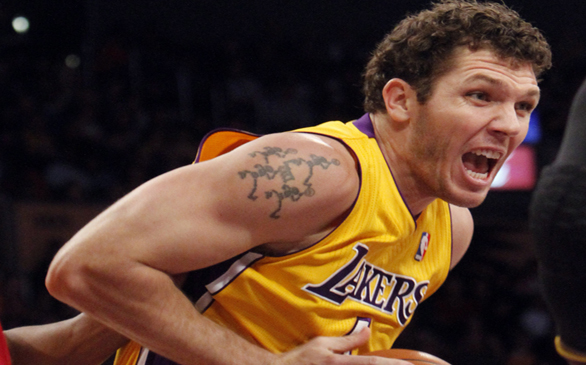 The Staples Center hosted its Lakers All-Access event sponsored by the L.A. Sports and Entertainment Commission Thursday, Jan. 27, where fans could get up close and personal with the team who has brought five NBA championships to their current home in downtown Los Angeles.

Fans of all ages were able to shoot around on the Lakers basketball court, run drills, participate in a silent auction, tour the Lakers locker room and take pictures with the Laker Girls and NBA Finals Championship trophies.

Macdonald started off the discussion by asking Fisher where he felt the team’s focus was this season and their chances of a possible second three-peat.

“We have what’s necessary to win the championship,” Fisher said. “We’re built to handle it, and not only handle it but get it done; ultimately, there is no fear on this team.”

The Lakers would face the Sacramento Kings on Friday, but it seemed their focus was more on Sunday’s matchup against the Boston Celtics. Fisher stressed how they can’t overlook teams and look onto just Boston, and how important it is that they take everything one game at a time and not neglect any team, regardless of record.

With the start of February, it seems the Lakers are awaiting the All-Star break. Fisher and Shaw spoke of fatigue amongst the players, and how the Lakers are now a veteran team that needs to “save their legs.” This break allows them to regain focus and get ready for the rest of the season.

After a short break, fans received a chance to view a one-on-one interview between Macdonald and Phil Jackson.

Jackson spoke of his experience in the NBA and how he never thought basketball would play such a huge part in his life.

“Basketball has fulfilled this competitive urge I have,” Jackson said.

Looking back in his career, Jackson stated how fortunate he is to have worked with great athletes over the years, including Michael Jordan and Kobe Bryant.

Jackson earlier this season claimed that win or lose this would be his last season as head coach for the Lakers.

“I’ve had my life organized for 265 days,” he said. “Sometimes it gets a little bit weary.”

Whether this final decision changes or not, Phil Jackson is one of the greatest NBA and Lakers coaches of all time, winning two championships as a player and 11 as head coach.

Special Feature
What would sports look like with smaller or no crowds?
164 views

Special Feature
He made most of his gap years: Capehart, 85, gets degree from USC after starting in 1952
193 views

Special Feature
The Pac-12 at a crossroads: morality or money?
1,084 views

Special Feature
Taking in a LAFC game is good for the sporting soul and stomach.
1,517 views