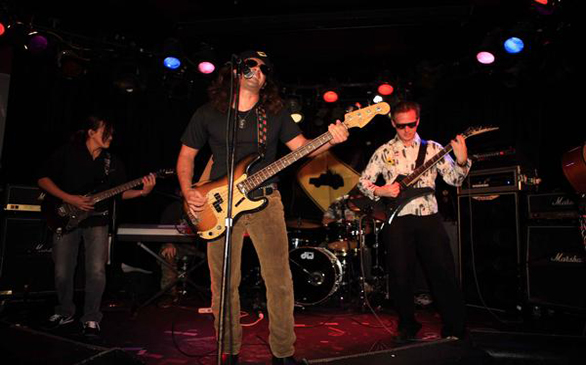 Los Angeles ends at the Santa Monica Freeway, or at least it might as well. The fact is, you can always get people to drive up from the South Bay or the beach for a night of music in Hollywood, but almost no one has the gas to go the other way.

Pity those poor Hollywood types. They are missing out on bands who are truly pushing the envelope; bands who are intelligent, bands who rock, bands like Slow Burning Car.

This guitar-driven machine plays full-throttle rock like you seldom hear further north. Call them metal if you will, but this is metal that’s been tempered with the heat of passion, fun and the kind of intimacy that just isn’t possible at those larger clubs up on the Sunset Strip.

For this show at the comparably intimate Crimsin in San Pedro, singer/bassist Troy Spiropoulos led the band through an impressive set of songs from Blowback, their debut, and the recently released Vol. 2 – The Scattering. Spiropoulos uses his lyrical melodies to really connect with his audience, most notably on “Marry Me,” a song written for his wife. He was singing directly to her on this night, and by the time he got finished, there wasn’t a woman in the house who wasn’t feeling he was singing directly to them as well.

Spiropoulos, who hosts the Internet radio show “Troy’s Room” on LA Talk Radio, is the star of the show, but that doesn’t mean the rest of the band is just along for the ride. Guitarist Brian Butler plays with a passion, emotion and intensity characteristic of the greatest axesmiths in rock. Victor Bishop adds a completely different level to the metal with his keyboard work. Drummer Mike Zimmerman keeps the whole fire cooking whether propelling the harder tracks or subtly underlining the softer works.

This is a band that deserves something bigger. If they keep up the quality, there’s no reason opportunity shouldn’t come their way as long as opportunity isn’t afraid to drive a little farther than it’s used to. Did I mention that parking is a whole lot easier in San Pedro than it is in Hollywood? That alone almost makes the trip worthwhile.