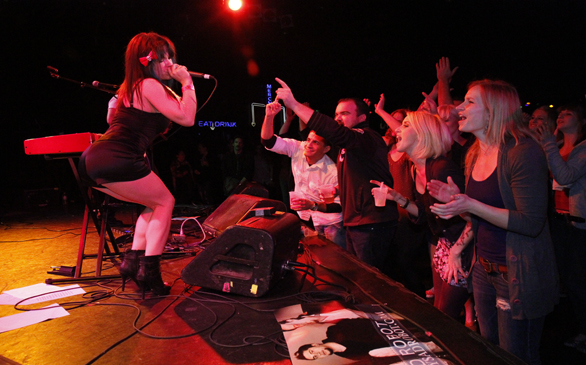 It’s not often that a person in the midst of a severe seasonal cold can drag themselves out of their house, let alone attend a live show in Hollywood at the Roxy. That is what happened this past Friday.

While sitting (and coughing) through the usual lineup of opening bands, I found myself wishing I were at home and in bed nursing myself back to health. That thought immediately changed the moment Sad Robot took to the stage and began what would turn out to be a very impressive show.

The instant the curtains went up, Sad Robot and their incredibly gorgeous and captivating Katherine Pawlak (vocalist and keys) had the crowd at the Roxy on their feet and competing to get to the front of the stage.

Opening with the song entitled “You’ll See in Time,” Pawlak’s soulful yet powerful and commanding voice instantly worked the audience into an indie-rock-induced frenzy. Throughout the night, Pawlak’s vocals were complimented by a solid performance from fellow band members Nick Perez (guitar), Chris Razze (drums) and Michael Marigliano (bass).

Pawlak definitely knows how to entertain a crowd. She constantly engaged the audience members during her songs and spoke to them directly in between. By doing so, she made the audience members feel as if they were more like close friends than just fans. Those lucky enough to be up front were treated to an eyeful of Pawlak’s unique and seductive stage moves that continued to draw enthusiastic screams from the crowd throughout the night.

Enough cannot be said about Sad Robot’s rock solid performance and Pawlak’s mesmerizing vocals and stage presence. This band was without a doubt born to perform and bring audiences to their feet. Not to mention they also seem to be a cure for the common cold.