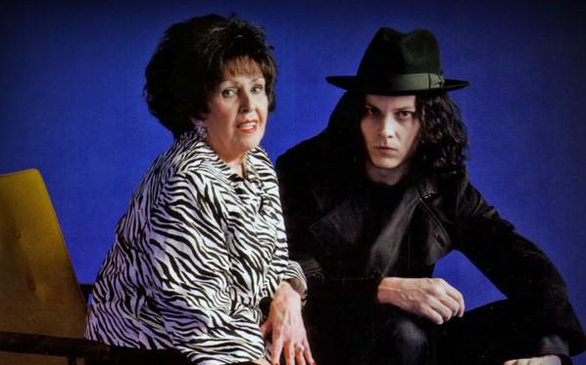 Just like when he produced Loretta Lynn’s Grammy-winning Van Lear Rose album in 2004, Jack White is instrumental in bringing another member of music royalty back to the forefront. This time, it’s 1950s rock pioneer Wanda Jackson, aka the First Lady of Rockabilly. White was at the helm for the recording of Jackson’s latest, a collection of cover songs called The Party Ain’t Over (released on White’s Third Man Records), and accompanied her on stage with the Third Man Band and her two backup singers, the “cupcakes,” on the eve of the album’s release, the second of two sold-out nights at the El Rey.

As the 73-year-old Rock and Roll Hall of Famer yodeled, wailed and growled her way through songs from The Party Ain’t Over, like Amy Winehouse’s “You Know That I’m No Good,” and reworked classics of her own (“Fujiyama Mama” and “Riot in Cell Block No. 9”), she shared bits about her one-time paramour Elvis Presley and likened White to a “velvet-covered brick” in describing his insistency that she cover certain songs. White didn’t disappoint either, providing sick guitar licks throughout the night, especially on closer, Johnny Kidd and the Pirates’ “Shakin’ All Over.”

Over the years, bands from Social Distortion to the Cramps have covered Jackson songs, and now, with White at her side, she’s poised for more critical and crossover success.