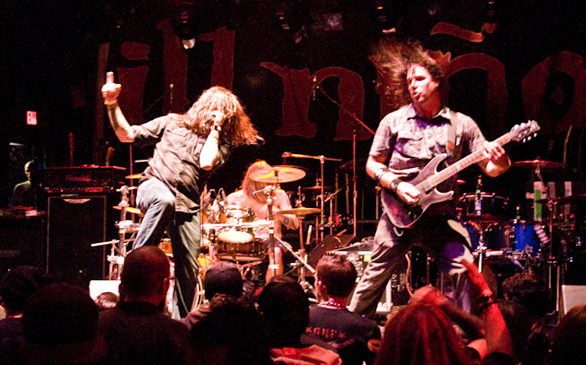 After talking with frontman John Sheldon, I was eager to see EkoTren take the stage at the Key Club on the Sunset Strip. EkoTren followed a darkly entertaining set by Fashion Bomb, hailing from Chicago, Ill. Ekotren took to the stage with heavy beats of drum and metal and instantly won over the audience.

The audience response was in and of itself entertaining as they made a mini mosh pit consisting of a rotating group of 10 excited, running audience members while the rest of the crowd danced and jumped with the band. While not everyone in the club knew every word, by the end of the night the band had more than a few new fans.

Ekotren, on tour from Cape Coral, Fla., has played with Ill Nino for years and were happy to continue their tradition of opening for them at the Key club, which they did in support of their last album in 2008.

The band – made up of John Sheldon in lead vocals, Keith Finnell on Guitar, Derek Desantis on Bass, Frank Jargiello on Drums – have been together for years and are now touring in support of their new album. The Dead of Night (released on Jan. 25) has had a great response, and the band is thrilled with the tour, which will continue through February.