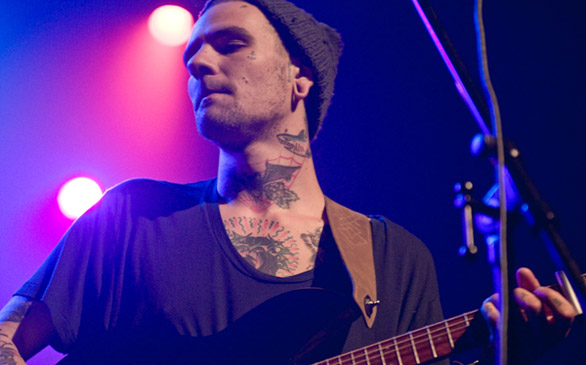 Fences, of Seattle, Wash., opened on Sunday night for punk rockers Against Me! at the Music Box in Hollywood. While Fences’ performance is much more subdued than that of the headliners, there is no doubt that by the end of the set, he and his accompanying band made more than just a couple new fans in the audience. At the end of his set, the audience screamed and clearly wanted more of the beautifully somber music presented by singer-songwriter Chris Mansfield.

Mansfield’s melancholy lyrics are clearly written from the heart and from his personal life experience. While the music and performance do not fit perfectly into any particular genre of music, Fences’ background in jazz comes through in new and surprising ways.

At the end of his set, Mansfield, with a “thank you” and a quick goodbye, walked off the stage and allowed his band to continue to play for a short time before following his lead. It was a somewhat quiet, but fitting, end to the set. Fences and his band will be continuing their tour finishing up in Boston at the end of February. Currently supporting Against Me!, Fences is promoting his self-titled album, produced along with Sara Quin of Tegan & Sara.