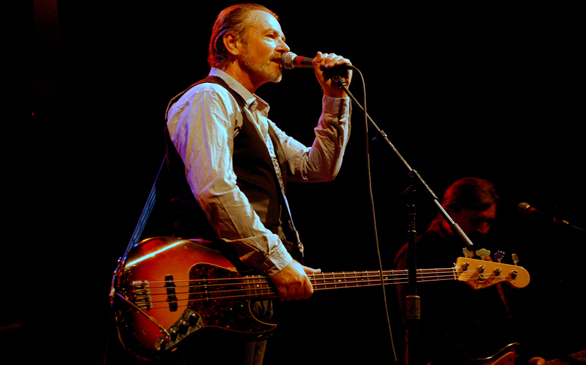 Australian rock band the Church celebrated their 30th anniversary by performing three albums in their entirety. Having recently been inducted into the Australian Recording Industry Association Hall of Fame, the band stopped in select North American markets to commemorate their achievement. Los Angeles kicked off the tour, as many songs were played live for the first time.

Lead singer Steve Kilbey introduced the band as they received an overwhelming reaction. Kilbey expressed his honor and gratitude to the fans while thanking them for an amazing career spanning three decades. The band began the night performing their latest album release, Untitled 23. “Cobalt Blue” officially marked the first of a 34-song setlist that included two intermissions between albums. “Pangaea” stirred early crowd participation and many sang in unison. Guitarists Marty Wilson-Piper and Peter Koppes provided soothing rhythms that transported everyone to the ’80s. The crowd enjoyed studio quality performances with each album.

After brief intermissions and wardrobe changes, the Church continued the night with their experimental album Priest=Aura. The tempos quickly picked up as drummer Tim Powles excelled. Wilson-Piper embraced the spotlight as he delivered amazing guitar solos while alternating with Koppes. The stage lights grew brighter as they transitioned into tracks from Starfish, their most successful album to date. The audience erupted with excitement as Wilson-Piper walked the stage with an acoustic guitar, and Kilbey sang the famous lyrics of “Under the Milky Way Tonight.” The dreamy aura in the air covered everyone with nostalgia as they shouted the chorus.

After three hours of marvelous music, the Church received a standing ovation as they bowed before walking off stage. The band delivered a once-in-a-lifetime performance. They truly provided each fan with an unforgettable night.