Due Date, Megamind and More 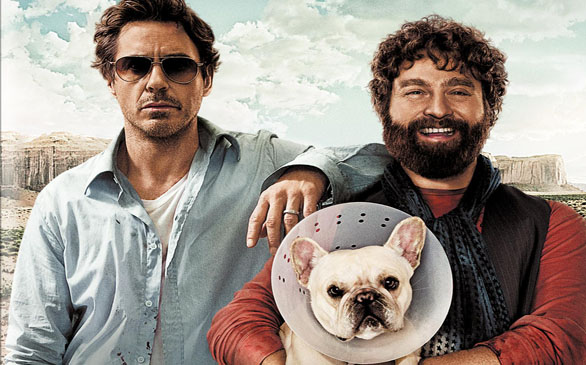 The Majors: Zach Galifianakis and Robert Downey Jr. are on the road trip from hell in Due Date. Taking a page from the Planes, Trains & Automobiles school of mismatched buddy comedies, the film follows a father-to-be who is relying on an obnoxious failed actor to get across the country in time for his child’s birth.

Bill Murray, Robert Duvall and Sissy Spacek star in Get Low, based on a 1930s folk tale about a hermit who threw his own funeral party while he was still alive.

After defeating his archenemy, a supervillain (Will Ferrell) finds himself in an existential funk in the animated Megamind (available Feb. 25). Joining the star-studded voice cast are Brad Pitt, Tina Fey and Ben Stiller.

Under the Radar: If Ed Wood had directed The Birds, the result might be Birdemic: Shock and Terror, the biggest cult hit since The Room. If films so bad they’re good are your thing, you have come to the right place. Tippi Hedren makes a cameo.

Fans of Shaun of the Dead will dig the horror-comedy The Last Lovecraft: Relic of Cthulhu. The last living descendant of horror writer H.P. Lovecraft finds himself humanity’s last hope when otherworldly monsters straight out of the Cthulhu mythos start wreaking havoc.

From Criterion With Love: Tony Curtis and Burt Lancaster each gave one of their best performances in the pitch black Sweet Smell of Success, a damning portrayal of schemers and hustlers in the dog-eat-dog world of late ’50s Manhattan. Ahead of its time in its relentlessly bleak tone, it paints the American pursuit of status as a classically tragic tale of hubris.

Blu Notes: Christopher Nolan exploded onto the indie film scene with Memento, a mind-bending modern noir about a man with brain trauma (Guy Pearce) who is unable to make new memories. Writing himself notes and tattooing clues onto his body, he attempts to track down his wife’s killer, but whom can he trust? This 10th Anniversary Edition Blu-ray features a remastered picture, retrospective featurette and more.

In Toon: All-Star Superman is an animated adaptation of Grant Morrison’s classic graphic novel. Lex Luthor has a diabolical plan for world domination and the Man of Steel is dying and without powers. Extra features include a behind-the-scenes look at Morrison’s writing process.

Stranger Than Fiction: Rocaterrania follows the visionary artist Renaldo Kuhler who invented an imaginary country during his unhappy youth and for the last 60 years has brought its elaborate history to life through his art.

Two classic episodes of “Mystery Science Theater 3000” are now available individually. Join Mike Nelson and his robot pals as they lambaste the dregs of cinema, The Incredibly Strange Creatures Who Stopped Living and Became Mixed-up Zombies (one of the show’s finest moments) and Beginning of the End.

Based on the best-selling book by Sasha Paley, Huge: The Complete Series follows the residents of a fat camp. Hairspray’s Nikki Blonsky stars in the funny and touching series from the creator of “My So-Called Life.”

Also Available: Nick Jonas in the 25th anniversary performance of Les Misérables, the animated Luke and Lucy: The Texas Rangers