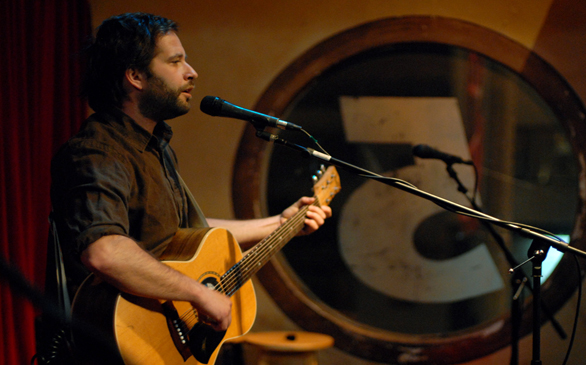 Montreal-based Chris Velan performed in front of a limited and intimate Hollywood crowd. As he removed his shoes on stage, he strapped on a guitar and introduced himself to the welcoming audience. At first glance, Velan appeared shy and modest while informing everyone about a cold he was fighting. But as he plugged in his acoustic and adjusted his microphone, he unleashed a musical onslaught that proved entertaining and exciting.

Velan is a one-man band that literally makes every musical sound in his live performance. Equipped with loop pedals for layered elements, he gently taps his guitar, creating simple drumbeats, and bleeds the guitar chords with fire and passion. Each track included variations of folk blues and soothing rhythms that provided mental images of his lyrics. Velan added an introduction to each song while explaining the history of each title. Aside from his talented vocals echoing across the room, his abilities as a guitarist caused loud reactions between songs.

The evening included warm rhythms that lingered in everyone’s head long after the song ended. His passion for music shined intensely as he shared his life experience through songs. Velan is currently working on new material that will be released this spring.