The Pretty Reckless: Prove To Be More Than Staged Project 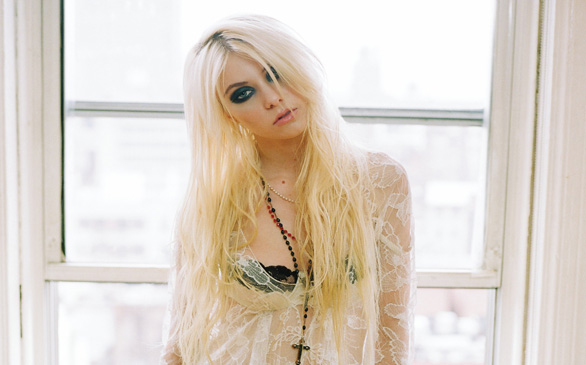 Cindy Lou Who is quite grown up. Friday, Feb. 11, How the Grinch Stole Christmas and “Gossip Girl”–famed Taylor Momsen blared her frustrations and sexual experience into a microphone that spread her voice to the attendees of the El Rey Theatre show. The girl showed up in red lingerie and talked about everything from sex to alcohol. But she’s only 17.

What could have prompted this blossoming teenager to leave behind the screen and tumble into the rawer world of the music biz?

Momsen’s transition into the music world was marked by her assertion that music was her escape from a tumultuous life. And Friday night she proved she’s not just an actress, and her new band the Pretty Reckless is not just an act.

Not every move from movie or television stardom turns out so well.

Back in the early 2000s, Juliette Lewis, who starred in Natural Born Killers and most recently Due Date, took to the stage with her band Juliette and the Licks. The band toured in various locations, working their way from a small set at the X Games to a show with Foo Fighters and Queens of the Stone Age in Hyde Park, London.

And for Zooey Deschanel, meeting Matt Ward on a movie set and working with him on a duet eventually led her to grace more and more music stages and make a new name for herself in She & Him.

But the success of any actress in a band depends on more than their usual typecast and roles on the screen.

Lewis was certainly able to let loose on the stage, throwing herself on the floor in strange positions and belting out notes like she was alone at home with no one watching. But the band lasted only a few years before Lewis released a solo album in 2009. Deschanel and Ward’s band She & Him built a fairly strong fan base once their sophomore album came out last year, while Deschanel’s sister Emily stayed on board for the sixth season of Fox’s successful forensic science and action series “Bones.”

With the possibility of more roles practically secured, why would an actress opt to trade in scripted lines for verses they most likely have to write themselves? If the music world was an opportunity to let free a little, all of the above women took it.

But finding your own personal freedom isn’t enough in the music world – and that’s the battle Momsen has to fight.

Image is everything, but when an actress lacks the proper pipes to back up her cutesy image, it shows. Whether it be at the El Rey Theatre or the Staples Center, there are no teleprompters or directors to lead you along the way. The techs set up the show, and the performer is left alone to do what she will with the hour or so during which hundreds, or thousands, of eyes watch her every move.

Unlike Lewis and Deschanel’s shift from actress to musician, Momsen’s performance feels rawer. Sure, the girl kept a few tricks up her sleeve, calling out to the audience and swaying her hips at appropriate moments, but in the moments when she sang, you forgot she started out as an actress. Despite the nervousness that was at times evident, Momsen’s unique voice and intuitive sense of musical aesthetics was obvious from the get-go.

Other male band mates may often be thrown into the background, but this is no act being put on by a rebellious teenager. What Momsen exudes in her tracks is the confidence of someone older than 17 who doesn’t care much about what anyone else thinks.

If Momsen manages to break free of the constraints of acting, in which the audience’s gaze is constantly in control of the actress’ actions, there will be something truly dynamic and freeing in the band. Momsen’s live performance showed her vocals are far from subpar, and the ripples of emotions proved the show is for more than the money.

Momsen drops into the world at a time when strange antics and eye-popping outfits reign supreme, a time in which her raccoon-eyelined eyes and Runaways-reminiscent lingerie pieces may be scoffed at. But her genuine musicality and sincerity make the Pretty Reckless much more than a well-played act.