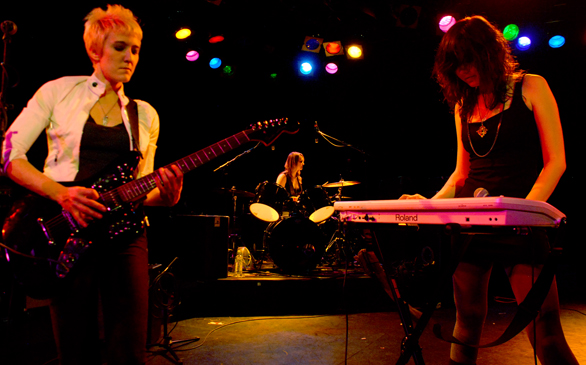 Indie pop rock band Vanity Theft energized the Roxy as they promoted their album Get What You Came For. Based in Dayton, Ohio, these four girls played with intensity and passion that electrified the crowd across the floor. While beginning their setlist, a wave of cheers flooded the venue as they embraced the reactions.

Lead singer and keyboardist Alicia Grodecki bounced around the stage at every opportunity while screaming her lungs out. Although she appeared shy and timid with her hair covering her face, Grodecki made the night her own by stomping across the floor and facing off with drummer Elyse Driskill and guitarist Brittany Hill. Bassist Lalaine Paras performed with a plastered smile as she fed off the live energy. Hill showcased her talents as a guitarist multiple times throughout the night by adding addicting riffs and switching the rhythms with each song.

Vanity Theft’s flirtatious attitude worked well with the audience as they won everyone over. Their lyrics described personal experiences about past relationships that revealed giggles and smiles at every opportunity. Still, the young group played with talent and heart that earned everyone’s respect. Expect these tough girls to explode across the indie pop scene.