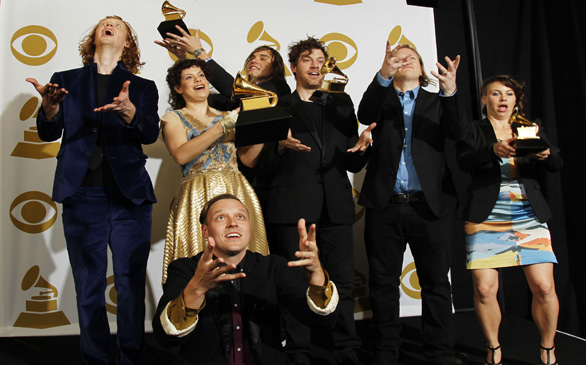 Every awards ceremony has its moments. This year, there was no Kanye West-like interruption to watch over and over on YouTube, but other surprises unfolded on the screen at the Grammys. Much uproar ensued when Album of the Year was announced. When Justin Bieber lost to Esperanza Spalding for Best New Artist, the feelings were similar. Who?

Those drooling at the over-the-top antics of Lady Gaga (who showed up in an egg that night) and the twinkling eyes of Katy Perry were shocked to see their nominated starlets miss the Album of the Year prize. Even well-known rapper Eminem was left to sit in the audience and watch as indie band Arcade Fire made its way to the stage to receive its award for the album The Suburbs.

For many Top 40 fans and Tweeters, the idea of someone besides their usually adored musicians taking such a big award was nothing short of heartbreaking and angering. Yet the point of the Grammy awards, as many seem to forget, is not to yield awards to those artists with the biggest following, but those with the best musical chops. This is no high school prom election, and in their most genuine, these categories should be followed according to their original intent.

That’s not to say the Grammys are always accurate – but the hard part is that this accuracy is in the eye of the beholder.

Arcade Fire is the first band to win a Grammy that produced its album with an indie label attached to it, something that breaks through the mainstream barrier in which music fans know all the greatest producers’ names. Gaga’s tracks paid big bucks to Akon, who first signed her on as a young musician. Now she’s strutting around in strange but expensive clothing from any and every designer, and that gets her even more attention.

But what Arcade Fire can present in its lack of elite clothing and fancy producing is a raw identity. The band recently even had an intimate show for 500 lucky fans in Los Angeles; something it is difficult to see Gaga or Perry doing.

For alternative music fans, the win means not only that an underdog got to rise to the top, but that the rock world is not as forgotten as it might seem. When a band like Arcade Fire trumps the highly produced, effects-happy work of other mainstream artists, it goes to prove that sometimes all you need for good music is a lot less than what others expect.

So who is the band?

They are a group of seven musicians from Montreal who stand up for Haiti and have no problem using their own means to get the word out about who they are. What might have gotten them the Grammy could have been their commitment to their music and also their ability to step back from the mainstream and construct something novel. The band is elusive at times, difficult to fully understand and has no glitter strewn over the covers of its albums. Their obsession with the suburbs and their childhoods only adds to the feeling that they are attempting to analyze what has happened to them in the past, and what is going on in the world, which transcends the recycled pop messages of most mainstream songs today.

Yet, the win cannot be boiled down to a mainstream versus indie tiff. The talent of the other nominees cannot be denied. There is something distinctly representative of each musician who took over the minds of music fans and made them type angry questions and hurl digital insults at both Spalding and Arcade Fire – and which navigated those same individuals to the Arcade Fire Web site. For those not invested in hardcore fanaticism, curiosity might, and Arcade Fire might, garner new fans.

The music scene as a whole, however, will not change with one win, though it might momentarily point music fans in a new direction. But what those new fans will find is a band very unlike their more mainstream contemporaries, something that can either change a music fan’s view of the music world or just turn them back to the more well-known names they were initially comfortable with.

The Grammy committee has a tough decision in its hands – they need the hot musicians performing for the sake of ratings to keep the audience pleased but also have the responsibility of making the correct decisions about winners. It seems this time they took the risk of pleasing a distinctly different group.

For the people who listened to Spalding and Arcade Fire years before this win, the right decision might have finally come.