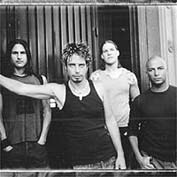 By 7 p.m., nearly 4,000 outwardly oblivious rock fans passed through tight security at the Hollywood Palladium for a show that can only be described as both fresh and classic.

For about 90 minutes, Audioslave bombarded the crowd with enough sonic thrills and excitement to distract even the militia from thoughts of war and violence. With Chris Cornell on vocals and Tom Morello on guitar, the audience was treated to a near-flawless fusion of the best that Soundgarden and Rage Against the Machine had to offer separately.

Cornell commanded the audience with droning hypnotic lyrics and vocals, and Morello transformed his guitar into a multitude of instruments during the show, returning the six-string to its mythical form of yesteryear. With Brad Wilk relentlessly attacking the drums and Tim Commerford slamming bass lines sans pick, the other former Rage members completed the circle.

Audioslave opened and closed with two songs from their debut album that were most reminiscent of Rage Against the Machine’s sound: "Set it Off" and the first single, "Cochise,"——easily the crowd’s favorite. During "Cochise," for the first time of the evening, this mostly 30-something crowd almost started to mosh. Almost.

Playing almost every song on the album from the melodic "I am the Highway" to the danceable "Hypnotize," Audioslave left little to be desired. Fans were also treated to a tear-jerking acoustic rendition of Brinsley Schwarz’s, "(What’s So Funny About) Peace, Love and Understanding," made famous by Elvis Costello in the 80’s, as well as an incredibly moving version of Rush’s "Working Man." Both ensured concertgoers that even though this band will never be as political as Rage, they still have a message.