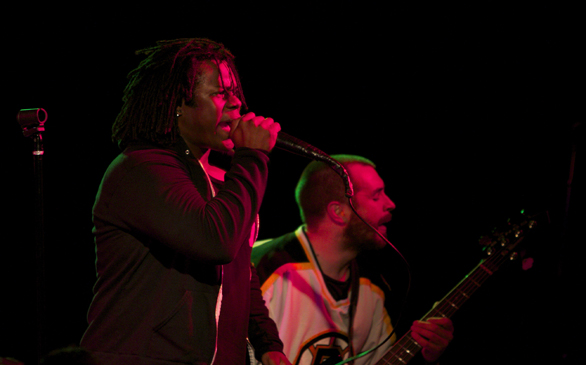 This collection of guys is showing some real promise. The songs move the fans in the crowd, and the energy is building. The talent is there for each instrument, and the song development seems to be there, too. So that begs the question: Why was only half the crowd moving? Sure, there were people there for the next band, but that doesn’t mean anything. If the songs are great, then they will connect with people. If the songs are OK, then they will pass by. So, that’s the thing with Benvenue. They are OK.

Now some of you might think that’s a bad thing. And that’s why some of you are still learning … Being OK isn’t a bad thing at all. To be able to come up with at least 10 songs and make those songs come alive on stage is tough. These guys did that, and not in a juvenile manner.

The big thing with Benvenue is that these guys have room to grow and the ability to do it. They have a sound, but they can’t quite figure out what it is. The talent is there. The drumming was spot-on, and the strings sounded as one. It’s just a matter of coming up with songs that sound like stuff we’ve all heard and turning them into ones that make us take notice.

I’m really interested to see where this act ends up in a year – to see if they figured it out; if their singer has found his own voice, if he can lead the band and really take this to the next level … Well, then I think we’re all in for a treat.

Seeing bands that are in this stage is one of the best things about going to live shows at the Roxy and other clubs in Los Angeles. So many are talented as hell, but just dancing along that razor-thin edge of greatness.