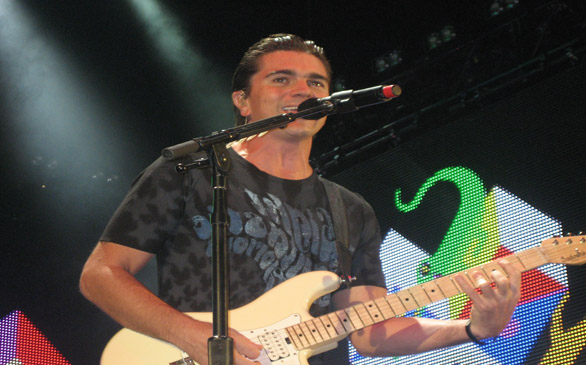 Juan Esteban Aristizábal Vásquez writes his songs from the heart. He does not hide the truth or what he feels or thinks.

Throughout his professional career, Colombian singer Juanes has captured the souls of the public worldwide. This definitely showed during his performance at a packed Staples Center in downtown Los Angeles on the third night of his P.A.R.C.E. Tour.

Within his 100-minute show, highlighting tracks from his entire repertoire, Juanes started the concert with P.A.R.C.E.’s first hit single, “Yerbatero (Herbalist).” This pop rock tune is guitar driven, and it deals with people who suffer from love and its hardships. “Yerbatero” has been a true success since its release in June 2010, and it produced the night’s perfect opening.

Before ending the first set, Juanes electrified the crowd with “La Camisa Negra (The Black Shirt).” Arguably the best song he has presented musically because of its significance, “La Camisa Negra” is a Spanish rock melody from Mi Sangre (My Blood, 2004) boasting the sounds of an electric and acoustic guitar.

After greeting fans with his fascinating Colombian Spanish accent, Juanes proceeded with romantic ballads and upbeat songs. But when he sang “Fotografia” (Photograph), even without the featured voice of Nelly Furtado, Juanes grabbed control of his audience in a beautiful manner. It was just an indescribable sense of connection that everyone felt, especially with its message relating to love and relationships.

Nothing compared to his encore song, however, since it is one of his most prominent. “A Dios Le Pido (To God I Pray),” an enticingly captivating rock piece, was highly anticpated by the fans since the show’s start.

Juanes hit the solo scene in 2000 after moving to California and exiting the Colombian-based heavy metal band Ekhymosis. A former resident of North Hollywood and Burbank, Juanes thanked the fans, citing that one of his dreams had become a reality: performing at Staples Center.

This probably will not be the last time he performs in one of Los Angeles’ most recognized venues. After all, Juanes’ humble ways have led to 17 Latin Grammy wins (the most by anyone), along with a one Grammy Award.