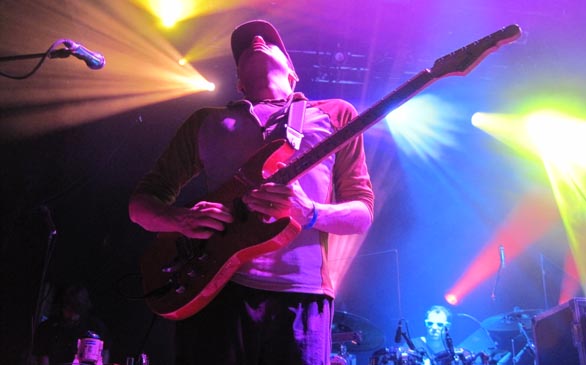 As we eagerly waited for the lights to dim and the curtain to drop, a familiar chant erupted from the sea of clad-green bodies filling the House of Blues on Sunset Boulevard from wall to wall: “We want the Umph! Gotta have that Umph! We want the Umph! Gotta have that Umph!” From that very moment, you could tell that this wasn’t going to be just another evening with Umphrey’s McGee. This, rather, was going to be a special St. Patrick’s Day with one of America’s favorite jam bands.

The Boulder-based duo Big Gigantic had put the sold-out crowd in an upbeat mood with a grooving set to kick the night off, and there was a buzz swirling through the air that had everyone anticipating Umphrey’s arrival. So when the sextet from South Bend took the stage roughly 30 minutes after Big Gigantic played its last tune, the long wait had finally come to an end.

It had been more than a year, in fact, since Umph had come to Los Angeles, the last time being in these same confines two days before Halloween in 2009. However, they didn’t waste any time getting into a few classics, first showcasing their prog rock roots with “Nothing Too Fancy” before transitioning into the jammy hit “In The Kitchen” that soon had the dance floor moving. Four songs later, and the band had inconspicuously shifted back into “Nothing Too Fancy” to close its first set. Highlighting the second set were some more Umphrey staples, including the 2007 sing-along “The Bottom Half,” a guest appearance from Big Gigantic saxophonist Dominic Lalli on “Ringo” and the face-melting guitar licks featured in “Miss Tinkle’s Overture,” compliments of lead axeman Jake Cinninger.

But after jamming for over two hours, Umph made sure to leave the animated crowd with a lasting memory on this festive night. After beginning the encore with the 2003 track “Glory,” percussionist Andy Farag joined lead singer Brendan Bayliss in surprising the crowd with their own version of “Regulators” as a tribute to the late Nate Dogg. And though a cover of the 1994 West Coast rap single may not have been what some overzealous fans initially wanted to hear before heading home that night, it proved once again that after more than 14 years on the scene, the limitations still remain endless for Umphrey’s McGee.