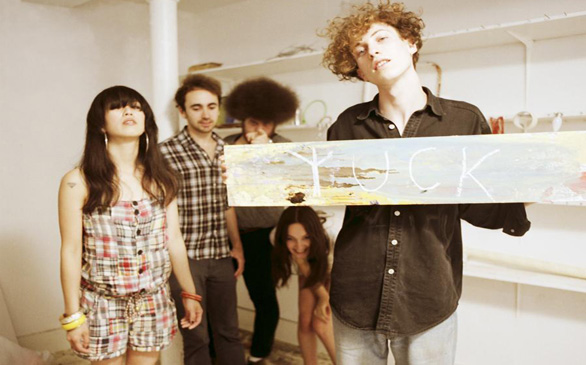 Yuck's fuzzy guitars are anything but icky.

Austin, Texas-hosted SXSW has come and gone, but you don’t need a full-blown music festival to check out some great, lesser-known or up-and-coming musicians from across the nation. Running the gamut from sultry vocals to strange band names, the appearances at this year’s SXSW can offer some variety to your current playlist. Only listening to some of the songs from these bands proves that they’ve got quite a bit of personality that they’re ready to give the music world – and you can experience it however far you are from Texas. The following artists are moving on up in the music world and prove they’ve got what it takes to stand out.

Massachusetts-hailing lo-fi band DOM has already created a track with Gucci Mane after releasing a debut EP titled Sun Bronzed Greek Gods, but it doesn’t seem like the fame is going to the guy’s heads any time soon. The messy-haired, jean-wearing quartet presents a sound both bouncy and melancholy in its unfolding. DOM’s “Bowl Cut” is anything but cookie cutter as it has you debating whether you want to dance or delve into the deeper issues of life. The band’s laid-back yet musically intriguing sound is bound to keep them moving up in the music world, but hopefully their low-maintenance personality stays intact.

Esben and the Witch

The band’s name sets up immediate expectations, and Esben and the Witch don’t fail to deliver. With echoing vocals and a dark yet engaging mesh of lazily played guitar chords and rhythmic drum beats, the band’s track “Warpath” feels a little shoegazer and a little Charlotte Gainsbourg. But the velvet texture of the lead singer’s voice blended with simple and sweet guitar riffs can draw any listener in. The trio got its name from a Danish fairy tale, but their sound is far from fairy tale friendly. If you’re looking for something that’s a little dark and a little soul-searching with just the right amount of easy-to-follow melodies, Esben and the Witch might do the trick.

Glad that she didn’t attend college and fully aware that she is a bad influence on the people she goes on tour with, Mayfield has got quite a personality to back up her lulling vocals. The feisty female’s single “Our Hearts Are Wrong” is a combination of a smooth yet commandeering Regina Spektor-esque vocal performance and a wooing and jazzy musical setup. Mayfield has all the parts of an alluring, dreamlike songstress but her background and lyrics show she’s got her amount of toughness underneath the pretty-girl image. See her at the Troubadour April 29.

For the foursome that could be in the running for least attractive band name, it was a pretty woman who got the songwriting juices flowing. But “Norgaard” isn’t the only trick the band has up its sleeve. “Wrecking Bar (Ra Ra Ra)” is a short and fun track that makes it sound like these guys are out to just have fun and make music. The song’s melody comes easily, creating a nonchalance that gets you in the mood to either start skanking or just sit back and head bop a little. The quartet’s obvious chemistry provides a solid backdrop for their debut, What Did You Expect From the Vaccines? (available May 31), and might certainly even woo the heart of a supermodel or two. See them at the Palladium June 3.

Shoegazer itching but not so much into dark melodies? Yuck’s OK with that. The band might compete with the Vaccines when it comes to strange names, but their fuzzy guitar chords and laid-back vocals are anything but icky. “Holing Out” sounds like it could almost be on a sitcom save for the gleeful use of feedback and the crunch pedal. What results is a track that doesn’t have a problem giving the limelight to the bass and that lets the song unfold as if nothing more natural could happen. Equal parts self-confessional and noise loving, the song proves Yuck’s chosen name is the only thing a music lover can immediately be repulsed by. See them at the Echo April 13 and the Satellite April 14.

Whether or not you’ve bought a ticket to one of the other major music festivals coming up, it doesn’t take much money to create your own fest from iTunes. The above bands are only a few of the many new ones blossoming in the music world, and you can sprinkle them into your musical repertoire sans the risk of painful music fest sunburns.