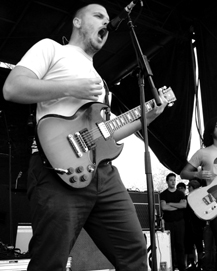 Who starts Warped Tour at 11 a.m.? Long Beach does, much to the chagrin of Atreyu and Thrice fans, many of whom missed their favorite bands as they waited in line for admittance. For those lucky enough to get inside the entirely too small Cal State Long Beach parking lot early, they got to have two of the best live bands on the tour start their day off right.

Atreyu growled, shredded and headbanged in true hardcore fashion, effectively getting the testosterone flowing at the day’s start. Fellow OC natives Thrice did much of the same, while injecting their signature brand of intellectualism. Previewing new songs off their upcoming album Vheissu, the band is already showing they plan to remain the kings of avant-garde rock, mixing everything from the painfully longing vocals and organ-keyboards of old-school Southern church soul to the modern hardcore that longtime fans first embraced them for. How would the next six-and-a-half hours of music be able to top that?

To start, SoCal pop-punkers Over It charmed audiences with their youthful confidence and infectious hooks. Emo-pop soft rockers Waking Ashland crooned to piano-driven ballads as girls swooned to front man Jonathan Jones’s soaring vocals. Feet jumped and fists pumped as Tsunami Bomb drew fans in with the charm of everyone’s favorite punk front woman, Agent M, and the hard-rocking energy of her band.

Bands like Stutterfly on the tiny Ernie Ball Stage to the Starting Line and Hawthorne Heights on the main stages, however, made music that sounded like a million other bands, proving that no matter what a band’s level of success is, there will always be trite, contrived bands with a gimmick to sell instead of musical integrity. Hundreds of kids ate it up, while the rest of us wondered why people don’t see through them. And what’s so special about Matchbook Romance anyway?

Bleed the Dream, on the other hand, proved to be the antithesis of such fakeness, playing the most emotionally wrenching hard rock this side of a Kevin Lyman production. Their fans responded likewise, doing their best to match the ferocity with which the band attacked their instruments. As anyone who happened to walk by the Volcom tent barely containing them discovered, Bleed the Dream would be the surprise hit of the day and leave the stage with more than a few new fans who didn’t know they existed before this show.

Among other big hits and misses, Transplants reminded kids why their singles are so catchy; their monotony also reminded these same kids why they like hearing the singles on the radio rather than listening to their CDs. The All-American Rejects also played their infectious-like-the-black-plague pop-meets-classic-rock, but their performance needed a jump-start despite solid musicianship.

Senses Fail was plagued by technical difficulties, and more hindered by a greater separation from the audience than they were helped by the bragging rights of being a main stage band. Go see the Jersey kids in a small, dirty, oversold club and it’s an entirely different (by which I mean better) experience.

Similarly, natural daylight was less than kind to My Chemical Romance and the atmosphere one would normally experience at their shows.

Underoath, The Bled and Silverstein were all shining examples of uninhibited, hard rocking chaos on stage, and their fans were shining examples of why hardcore dancing should be legally banned. And Fall Out Boy – they should just change their name to the Pete Wentz Band already.

Then there was Avenged Sevenfold, unholy saviors of modern metal. Giving an actual performance along with the giant rock they always bring, their set only consisted of six songs in their 30-minute allotment, but it was the most epic six songs of any band that took the stage. From fan favorite "Unholy Confession" to the Hunter S. Thompson-inspired "Bat Country" off City of Evil, Avenged fans showed that, despite the trash-talking, their unparalleled dedication to the band remains unwavering.

Leaving CSULB with empty wallets and purses, sore feet, sunburned faces and the not so uncommon bruise or laceration, attendees were likely asking themselves why we do this every year. But, like an addiction to MySpace or cocaine, we’re all counting down the days until we can do it again.