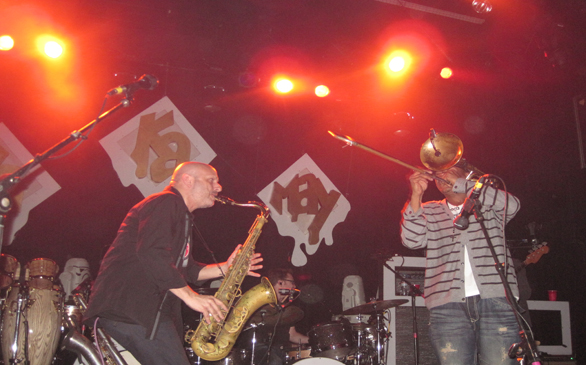 In a city where ravers and beat junkies dominate much of today’s music scene, funk doesn’t hold the same allure to Los Angelenos as it did more than 30 years ago. Yet you wouldn’t necessarily know that from the chockfull room of people at the El Rey Theatre ready to take in one of New Orleans’ funkiest outfits on a weeknight.

That’s because while following in the footsteps of its pioneering heroes, the Meters, Galactic has also been able to carve out a niche among jam band fans for over a decade. As a result, it has led to multiple performances on the highest level, from Bonnaroo to Jazz Fest, and shows with prominent headlining acts, such as the Allman Brothers Band, the Roots and B.B. King.

The band’s 17-year run, however, can be divided into two chapters: with Theryl “House Man” DeClouet and without him. DeClouet’s departure in 2004 for health reasons left fans wondering at first if Galactic could keep crowds buzzing without a true frontman. But after four years between albums, the quintet discovered a new path with the 2007 release, From the Corner to the Block, by collaborating with a list of rappers that included the likes of Lyrics Born, Chali 2na, Boots Riley and Juvenile.

Now, coming off its 2010 recording, Ya-Ka-May, an album representative of the Crescent City’s post-Katrina landscape, Galactic has continued to evolve its sound, blending its funk roots with hip-hop, bounce and go-go grooves, all while keeping sold-out venues entertained from start to finish with a variety of guest vocalists.

And though things haven’t been quite the same since DeClouet stepped off the stage, Galactic still has plenty of tricks up its sleeve – from Stanton Moore’s innovative drum solos to Ellman’s interspersed harmonica and producing skills – to keep you dancing until you almost can’t feel your legs.