A Rocket to the Moon/Anarbor: April 5 @ The Roxy 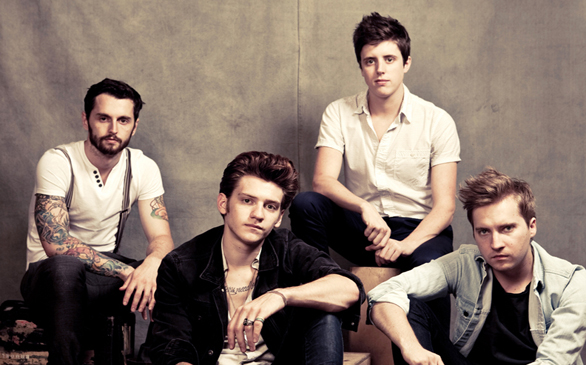 It’s hard getting old in the rock scene these days. One day you’re the cool kid at shows with asymmetrical hair and more accessories than any one person should wear, and the next, you’ve been displaced by a younger crowd with even more asymmetrical hair and more neon than any one person should ever wear. Accordingly, this Rocket to the Moon show brought with it some great examples of both how to fail at being age-appropriate and how to grow up gracefully.

On one hand, the show featured worthwhile acts Go Radio and Anarbor, both of whom managed to bring a grown up rock ’n’ roll sensibility to their infectiously catchy styles. Go Radio frontman Jason Lancaster’s whiskey-soaked crooning was raw and emotive, while still being entirely sing-along worthy, the kind of qualities that just might restore one’s faith in this genre of rock. It’s a shame they were the first band to take stage, as the line of teen girls outside awaiting admittance could have been served to see the right way to do mature punk-pop.

At the very least, Anarbor had the luxury of a direct support spot on the bill, though their high-energy set proved to be more than worthy of headliner billing. Loud, sweaty and uninhibited, the Phoenix-bred foursome showed themselves to be masters of invoking crowd participation to match their intensity. Vocalist Slade Echeverria and guitarist Mike Kitlas were expert showmen, though never once sacrificed musicianship for it, bringing a brand of rock to the stage that was far beyond their years.

And then you have a band like Rocket to the Moon – adult contemporary radio rock for a pre-teen audience. To the band’s credit, their audience ate up their set, but the combination of trite lyrical clichés, going-through-the-motions performing and an inability to show any authentic personality likely left anyone who doesn’t pick which bands they like based on how cute the members are feeling a little cold.