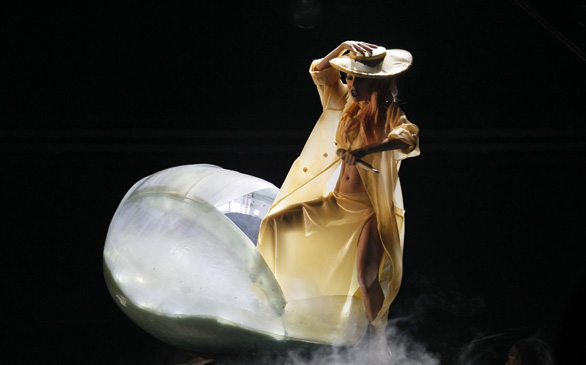 The fact that Lady Gaga is becoming a fashion columnist might not shock many people. But it might repulse some.

The woman who sported everything from a raw meat dress to a completely latex outfit should know something about the new trends in fashion, especially since she’s buddy-buddy with some of the biggest names in the fashion world.

But who’s ever taken a glance at something she’s written that wasn’t music lyrics? Who’s legitimately asked for a writing sample and quizzed her on Associated Press style? Probably not the people at V Magazine who are giving Mother Monster a post as fashion columnist this summer.

This is in no way an insult to Gaga herself. Surely the pop sensation is perfectly capable of crafting an article on a regular basis that both fans and literary buffs around the world can appreciate. But did V Magazine take her simply because of her fame?

This is the blessing and curse of being a famous musician. Anything the musician touches becomes great for the company interested, but it doesn’t necessarily make it successful, and sometimes the artist ends up looking foolish.

But for someone who has taken advantage of the media and called attention to herself so much, Gaga is just the person to take advantage of this possibly double-edged sword.

In pop culture now, Eminem and Ice Cube can be actors and MTV can overlook Bret Michaels’ age and give him a reality show with hot, mostly younger, girls.

By simply dropping their names, these popular and famous musicians can take a stab at career paths that many work years to gain and be successful at.

Yet, it this very type of power that can engender all types of creative exchanges. When it comes down to it, Gaga, according to her retelling of the facts, worked as hard as the next musician to get her name out into the world and have one of her tracks finally played on the radio.

Some columnists may cry out in indignation and feel offense that their career and means of living are being poked fun at, and this is a legitimate concern. But the fact of the matter is that no one will stop a columnist from going home and singing their hearts out in the privacy of their own home. They are not making a living out of the notes they sing in solitude, just as Gaga is not making her living out of her column entries.

Both parties can be happy.

No one is upset when artists become political figures, charitable givers or selfless mentors, so the same standard should be upheld when musicians want to become fashion designers, authors and artists. Nowadays, categories are being blurred and it’s difficult to be dedicated to a single activity in one’s lifetime.

Gaga can serve as an example to other musicians and show them that they don’t have to limit themselves and they can do and be whatever it is they want while still being a musician.

Gaga will most likely be scrutinized by those who make their living off writing, but this will hardly be enough fuel to get rid of her fame. If crossing over from one medium to another weren’t possible or successful or lucrative for musicians, the thought probably wouldn’t cross their minds in the first place. Gaga might be doing it for more attention, but in the end it’s more time out of her already packed schedule and her writing will mostly benefit V Magazine, which can boast of having Stefani Germanotta aka Lady Gaga aka Mother Monster as a columnist, no matter how great or not her writing is.

If I tried to sell myself to the Los Angeles Times as a columnist this minute, though I’m only a few years younger than this pop superstar, they’d probably tell me to go back to school, take some journalism classes and build a better portfolio. But that won’t stop me from singing Gaga’s songs full blast in my dorm room and waiting for the first issue of V Magazine to hit stands.

There’s nothing wrong with a musician who can get you to sing and also pick up a magazine to read in quiet once in a while.