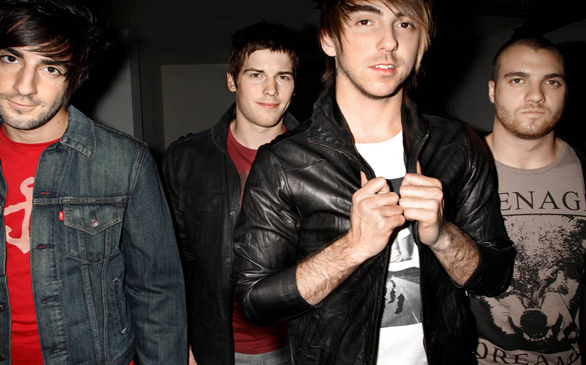 lights dimmed to signal the start of All Time Low’s set. Someone nearby jokingly likened it to an ’N Sync show circa the mid-‘90s. Hopefully jokingly. Not that was a terribly inaccurate comparison, though.

Really, who would’ve thought that the small band playing opening slots of largely unnoticed pop-punk tours five years ago, or the band playing mid-day on Warped Tour’s tiny Ernie Ball stage four years ago would turn into this? A headliner band selling out large sized theater venues – quite a difference a few years makes.

At the very least, while their musicianship has matured and their fan base evolved, it’s comforting to know that the Baltimore foursome’s collective stage persona remains as charmingly immature as ever. Schoolyard humor abounds, both in their lyrics and their between-song banter, the band is something of a walking paradox. While they somehow have managed to lyrically devolve with each album they release into blatant talk of excessive partying, the instrumentation backing the words has become more intricate and even more infectious over the years. Accordingly, the band’s live show has continued to step up with each outing, with all four members looking like seasoned pros when they took stage for this show, working their audience from every angle.

Playing fan favorites from across their body of work, including selections from new album Dirty Work, the band showed that underneath all the snarky posturing and pandering to teen fangirls are four dudes who are actually really good at their instruments. It’s just a shame that it gets forgotten sometimes for the sake of being crass.