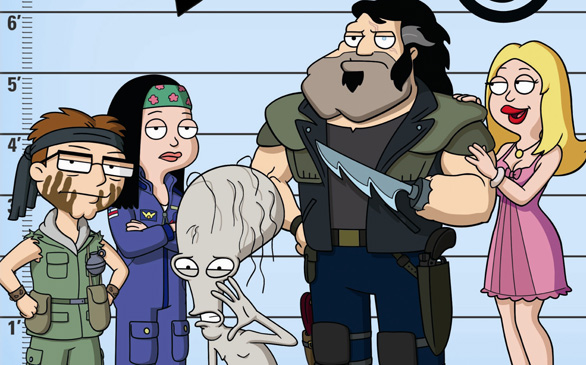 The Idiotbox: Daniel Browning Smith, the world’s most flexible man, joins the legendary creator of Marvel comics in traveling the world to find real-life mutants in Stan Lee’s Superhumans: Season 1.

American Dad!, Vol. 6 follows the misadventures of an overzealous CIA agent and his family, including his alien friend Roger. “Family Guy” creator Seth MacFarlane puts his absurdist style to good use as Stan battles the Antichrist and defends democracy.

Glee: Encore compiles all your favorite musical numbers from season one.

From the Vault: Some great lesser-seen gems are now available online via the Warner Archive Collection. The Rise and Rise of Michael Rimmer is a neglected satire written by members of Monty Python and star Peter Cook, who plays an unscrupulous market researcher who manipulates his way to the top of British politics. It's a hilariously inventive critique co-starring Denholm Elliott and John Cleese.

Beyond a Reasonable Doubt and While the City Sleeps are two late-era noirs by the master Fritz Lang. In the first, a journalist attempts to draw attention to the shortcomings of the justice system by framing himself for a crime he didn’t commit but loses the evidence that would clear his name. The second is a serial killer thriller co-starring Vincent Price and Ida Lupino.

The Squeeze is a ’70s British thriller by director Michael Apted starring Stacy Keach as an alcoholic cop who goes up against the mob after they kidnap his ex-wife.

Stranger than Fiction: Narrated by Peter Gallagher, GasHole exposes how oil companies manipulate prices and kill off competition in the form of alternative fuels. It’s an infuriating and vital exposé.

The director of Spellbound takes a look at the double-edged sword that is winning the lottery in Lucky. The documentary follows five winners from different walks of life whose lives were suddenly turned upside down by newfound wealth.

Blu Notes: In honor of his 70th birthday, two classic Bob Dylan documentaries come to Blu-ray: Don’t Look Back, D.A. Pennebaker’s cinéma vérité masterpiece, is actually a performance piece of sorts in which Dylan plays a cocksure jerk, alienating everyone around him and antagonizing the press. The Other Side of the Mirror captures Dylan’s appearances at the legendary Newport Folk Festival, from his protest days with Baez in ’63 to his controversial electric set in ’65.

For Mom: Lifetime is releasing five new movies in time for Mother’s Day, including Honeymoon with Mom and Sex and the Single Mom.

Under the Radar: Based on a story by E.L. Doctorow, Jolene follows a 15-year-old girl on her 10-year journey across America. Dan Ireland (The Whole Wide World) directs.

Bunny and the Bull is a surreal road trip comedy from the director of the cult British series “The Mighty Boosh.”